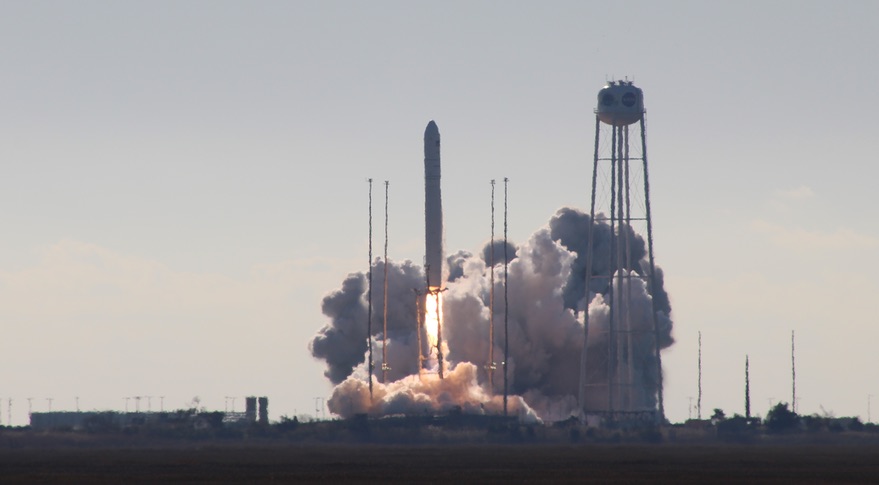 WALLOPS ISLAND, Va. — A Northrop Grumman Antares rocket successfully launched a Cygnus cargo spacecraft on a mission to the International Space Station Nov. 2, kicking off a new era in cargo delivery for the station.

The Antares 230+ rocket lifted off from Pad 0-A at the Mid Atlantic Regional Spaceport here at 9:59 a.m. Eastern. The Cygnus spacecraft, named by Northrop Grumman the S.S. Alan Bean after the late Apollo-era astronaut, separated from the rocket’s upper stage about eight and a half minutes later.

The Cygnus is scheduled to arrive at the ISS Nov. 4, grappled by the station’s robotic arm at around 4:10 a.m. Eastern and berthed to the station later that morning. It will remain on the station until January.

The mission, designated NG-12, is the first mission under the new Commercial Resupply Services (CRS) 2 contract, a follow-on to the original CRS contracts awarded in 2008 to Orbital Sciences Corporation (now Northrop Grumman) and SpaceX to transport cargo to and from the station. Northrop is introducing new capabilities to both Antares and Cygnus to meet the requirements of the CRS-2 contract.

“CRS-2 I would describe as more of a step-function change in the capability” of the system, said Frank DeMauro, vice president and general manager of Space Systems at Northrop Grumman, during a prelaunch briefing at NASA’s Wallops Flight Facility here Nov. 1.

One change is the ability to carry more cargo. The Cygnus is loaded with 3,705 kilograms of cargo, more than any previous mission. The spacecraft can now carry 10 middeck lockers filled with payloads, compared to six on the previous Cygnus mission in April. The spacecraft also has improved power and telemetry capabilities for those payloads, allowing researchers to maintain contact with them during the two-day journey to the station.

On the previous Cygnus mission, Northrop introduced a “late load” cargo capability, allowing time-sensitive cargo, such as biological experiments, to be loaded onto the spacecraft within 24 hours of launch. A similar late-load capability was already available on SpaceX’s Dragon spacecraft.

The NG-12 mission means that, for the first time, two Cygnus spacecraft are in orbit at the same time. The Cygnus from the NG-11 mission, which departed the station in early August, remains in orbit to demonstrate the ability of the spacecraft to perform a long-duration free-flying mission. “That is continuing extremely successfully,” DeMauro said.

With the launch of the NG-12 Cygnus controllers will test their ability to operate two spacecraft simultaneously. “We think that is a key capability for NASA or other government agencies or commercial industries,” he said.

DeMauro said Northrop will start planning the end of the NG-11 mission after the NG-12 Cygnus arrives at the ISS. “We haven’t set a deadline for when we’ll bring it back,” he said of the NG-11 Cygnus. “I don’t expect it to be that much after NG-12 on orbit.”

Increased cargo, and increased mass of the Cygnus itself, required improvements to the Antares launch vehicle. This launch marked the debut of the Antares 230+, a version of the Antares with changes such as increased structural strength of the first stage. That eliminates what Kurt Eberly, Antares vice president at Northrop Grumman, called the “throttle notch” where the rocket’s RD-181 first stage engines throttled down during maximum dynamic pressure. Instead, the engines remain at 100% thrust throughout their nearly 200-second burn. That change, along with others to reduce the mass of the vehicle and to deploy the Cygnus in a slightly lower orbit, increase the vehicle’s payload capacity by about 800 kilograms.

Eberly said that this version of the Antares is being “on-ramped” to the NASA Launch Services 2 contract, making it eligible for launching NASA science missions as well. “It allows us to be more competitive and lift heavier payloads and address more market going forward,” he said. The CRS contracts have been, to date, the only customers for the medium-lift rocket.

The payload on the NG-12 Cygnus mission includes nearly 2,000 kilograms of science investigations. They span the usual gamut of science and technology demonstration payloads, from biological research to materials science.

Included on the Cygnus is the AstroRad Vest, developed by Israeli company StemRad and Lockheed Martin. Astronauts will wear the vest to test its performance in shielding them from radiation from solar storms. The suit is customized to provide “selective shielding” for key organs, said Oren Milstein, co-founder and chief scientific officer of StemRad, and its high-density polyethylene material can provide the same level of shielding as a much heavier storm shelter inside a spacecraft.

Another payload is an oven developed by Nanoracks and Zero Gravity Kitchen to test the ability to bake foods in space. The first use of the small oven will be to bake cookies in a partnership with hotel chain Doubletree.

While the experiment may sound trivial, the companies see it as a pathfinder for future human activities in space, such as commercial space stations or long-duration missions beyond Earth. “What are we going to need for those people to have a good experience?” said Mary Murphy, senior internal payloads manager at Nanoracks. Something as simple as baking in space, she said, “can make people have a comfortable experience for a long-duration spaceflight opportunity.”

Several cubesats are on the Cygnus for later deployment. Two of them are for the National Reconnaissance Office as part of a program called IMPACT to perform in-space validation of 14 technologies for potential later use on operational NRO missions.

The cubesats use a standardized interface as part of an unclassified initiative called the Greenlighting program to allow experiments to easily be added to the cubesats, said Maj. Michael Felten of the NRO in a Nov. 2 interview. One example is testing of a microprocessor originally designed for the oil and gas industry to see if it can also be used in space applications.

“We use the results from the R&D as far as the performance in space and the survivability and the degradation of those components to influence the selection of new technologies into our future operational systems,” he said. “It allows us to pick the newest and the most capable components for our future collection capabilities.”

Also on the Cygnus is hardware to perform repairs of the Alpha Magnetic Spectrometer (AMS) instrument outside the station. That experiment, mounted on the station in 2011 for an initial three-year mission to measure high-energy cosmic rays, continues to operate today but its cooling system is failing.

The Cygnus is bringing a new cooling system and special tools that astronauts Andrew Morgan and Luca Parmitano will use in a series of five spacewalks to repair the AMS. Kirk Shireman, NASA ISS program manager, said at the prelaunch briefing that those spacewalks would likely begin in mid-November. A separate set of spacewalks to replace batteries in the station’s power system, interrupted by a failed battery charging unit last month, will resume after the AMS spacewalks.

A repaired AMS could operate through the 2020s, pending decisions by the ISS partners to extend station operations past its current deadline of 2024. Sam Ting, the Nobel laureate physicist who is the principal investigator for AMS, says the extended mission will allow it to address issues ranging from the abundance of antimatter to confirming one model for dark matter.

“AMS will continue to collect and analyze data for the lifetime of the space station, because whenever precision instruments such as AMS are used to explore the unknown, new and exciting discoveries can be expected,” he said.

The NG-12 launch is part of a busy period of activity on the station. A Japanese HTV-8 cargo vehicle, launched in September, departed the station Nov. 1. Both a Russian Progress cargo spacecraft and a SpaceX Dragon cargo spacecraft are scheduled to fly to the ISS in early December.

Two other companies have CRS-2 cargo contracts with NASA. SpaceX will transition to its CRS-2 contract, using a cargo version of its Crew Dragon spacecraft, in 2020. Sierra Nevada Corporation will start flying its Dream Chaser cargo spacecraft under development to the ISS in late 2021. All three CRS-2 contracts include a minimum of six missions per company through 2024.