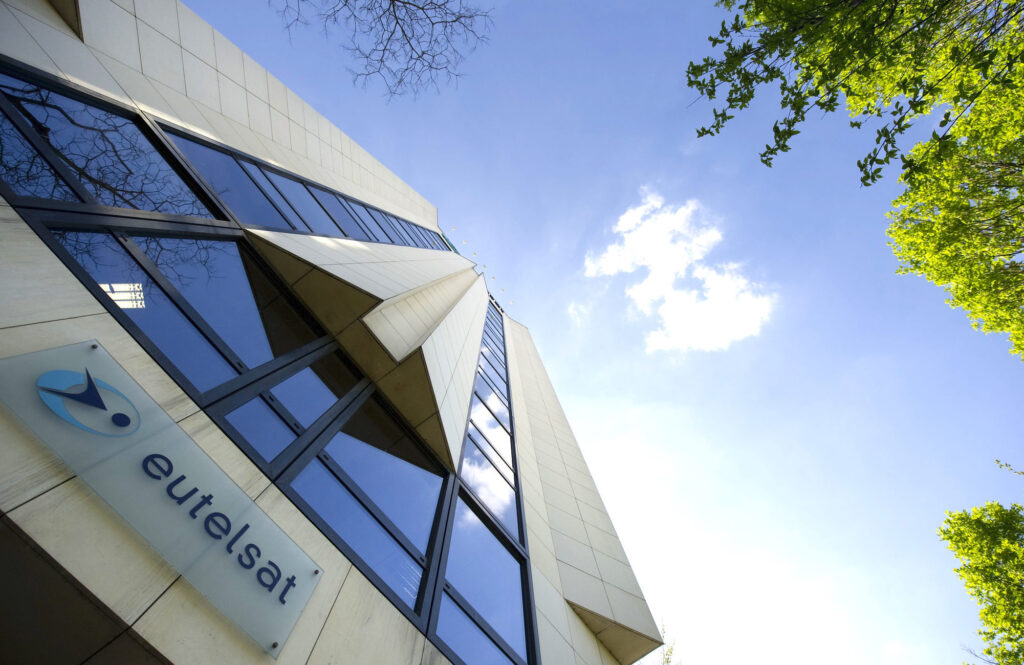 WASHINGTON — With revenue down and its just-launched satellite in trouble, Eutelsat Communications is preparing to layoff around 100 of its 1,000 employees, freeze wages and suspend hiring as it looks to return to growth.

Sandrine Téran, Eutelsat’s chief financial and IT officer, said Oct. 30 that the company hopes the initiative, called LEAP-2, will save 20 million to 25 million euros ($22.3 million to $27.9 million) by the end of its fiscal year 2022.

Paris-based Eutelsat, having already reduced its annual capital expenditure budget from 500 million euros to 400 million euros since 2016, has turned its gaze to other means of saving cash while investing in broadband connectivity to jump-start growth.

“The plan will involve multiple measures, including a reduction of circa 100 net count outside of France, a global hiring freeze in the legacy businesses, and austerity measures within France, including a compensation freeze over three years,” Téran said during a company earnings call.

Eutelsat cut 32 million euros from its operating expenses over the past three years through its LEAP-1 program, surpassing an original target of 30 million euros. The company announced the LEAP-2 program in July.

Téran said the purpose of the LEAP-2 program is “to create headroom to reinvest in our connectivity businesses,” while preserving the company’s EBITDA, or earnings before interest, taxes, depreciation and amortization, margin.

Eutelsat estimates it will generate between 1.28 billion and 1.32 billion euros during its current fiscal year, which started July 1. That target range assumes the new Eutelsat 5 West B satellite, which is having a solar array problem, will enter service as planned.

Eutelsat 5 West B launched Oct. 9 on an International Launch Services Proton rocket. Two weeks later, Eutelsat said an “incident” with one of the Northrop Grumman-built satellite’s two solar arrays had compromised its ability to provide service.

Téran said Eutelsat 5 West B is insured for 173 million euros, and that an investigation is ongoing to see if the satellite will still be useful.

Eutelsat 5 West B is mainly a replacement satellite for the 17-year-old Eutelsat 5 West A satellite, but it also carries a payload for the European Global Navigation Satellite Systems Agency. The European Geostationary Navigation Overlay System, or EGNOS, hosted payload is anticipated to generate around 7 million euros in annual revenue for Eutelsat, or 102 million euros over its 15-year life span, Téran said.

If the satellite is declared a loss, Eutelsat would forfeit those revenues.

Téran said Eutelsat hopes to reach a conclusion about Eutelsat 5 West B by the end of November. The satellite’s predecessor is projected to run out of fuel in December, she said, but could possibly last longer if Eutelsat shifts it into an inclined orbit.

Eutelsat 5 West A generated around 30 million euros last year, and is mainly used to broadcast television channels to Europe and Northern Africa.

Téran said it was too early to talk about a mitigation plan if Eutelsat 5 West B is declared a loss.

“We need to understand the scope and assess the impact first,” she said.

Téran said that around 280 million euros of Eutelsat’s 400-million-euro annual capital expenditure budget is typically dedicated to replacement satellites and maintenance activities, but that recent spending has trended in favor of growth satellites. She cited three high-throughput satellites — Eutelsat Quantum from Airbus, and the Konnect and Konnect VHTS satellites from Thales Alenia Space — as absorbing a large amount of growth spending. All three are focused on broadband connectivity.

Eutelsat also recently announced intent to purchase another satellite from Thales Alenia Space, called Eutelsat-10B, that will have a mix of traditional wide-beam and high-throughput spot-beam capacity. That satellite is a replacement, but will include growth capacity, particularly for in-flight Wi-Fi. Gogo is an early customer for the satellite’s capacity, which is planned to launch in 2022.

Eutelsat tallied 317.6 million euros in revenue for the months of July, August and September, down 5.2% from the same time last year. The company reported declines across all business segments, including a 1.7% decline in broadcast, which counts for 62% of the company’s total revenue.

Téran said broadcast remains strong despite the drop, which was caused by the termination of a customer in sub-Saharan Africa and the negotiated return of some transponders in Russia.

Expansion capacity on the recently launched Eutelsat-7C will grow broadcast revenues in Africa, and Eutelsat expects to quickly resell the company’s empty Russian transponders, she said.

Téran said some 69% of television channels broadcast on Eutelsat satellites have upgraded to a compression standard called MPEG-4 — a standard that reduces broadcaster’s bandwidth needs but also paves the way for them to deploy high definition channels that require more satellite capacity. Only 23% of the channels broadcast on Eutelsat’s fleet are in high definition, meaning the difficult part of the transition is mostly past. Téran said HD channels grew 11% over the quarter, while MPEG-4 adoption increased by 2%.