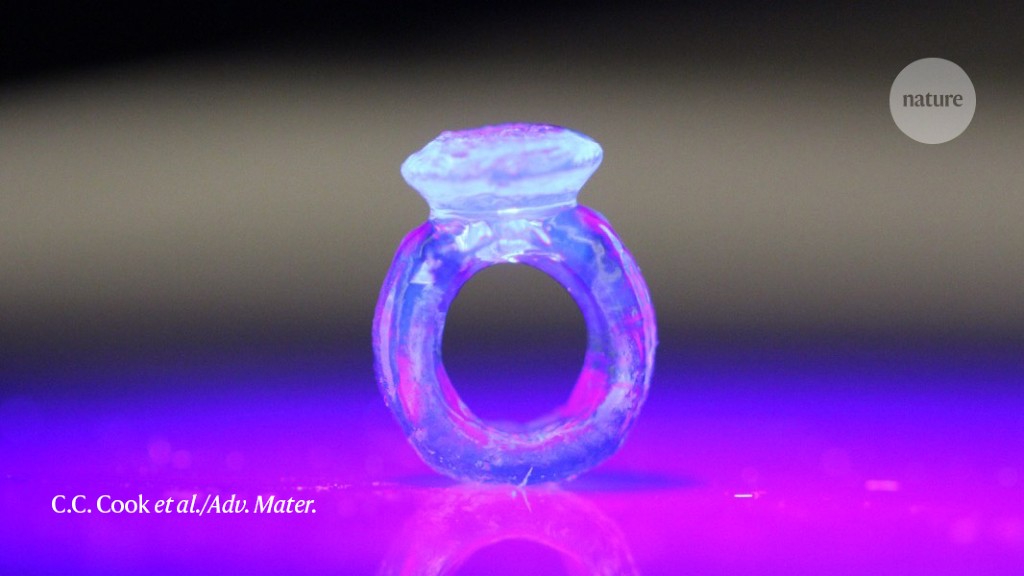 From a vat of liquid resin, a 3D-printed ballerina emerges mid-pirouette in one smooth piece. Thanks to the liquid resin’s versatility, new dancers joining her could be either stiff and tough, or bendy and stretchy.

Most 3D-printing techniques gradually build up an object one thin layer of raw material at a time; finished products have a characteristic roughness. An alternative method prints objects by projecting multiple beams of light encoding the desired 3D shape into a resin inside a spinning vial, solidifying the desired form within minutes. But so far this technique has worked only with resins that harden into objects that are as brittle as glass.

Maxim Shusteff at the Lawrence Livermore National Laboratory in California and his colleagues identified three suitable molecular building blocks and combined them into resins. By varying the ratio of these molecules in the resin, the team could create objects with a vast range of material properties.

Some printed objects could stretch to more than four times their length before breaking. Others were stronger than most high-performing engineering plastics used in planes and cars.

White papers: RaySearch Laboratories highlights advances in radiation oncology software – Physics World
Trump campaign ran a Facebook ad implying he won the election, which is supposed to be against the company’s rules
Highly Polluting Used Cars Sold to Africa and Poorer Countries by US, Europe, and Japan Contribute to Climate Change
How Amazon keeps a close eye on employee activism to head off unions
Payload competition on a SpaceX Falcon 9, chicken nugget and 4G network also head into space – Physics World