The practical and straightforward aerial bridges or Rainforest Canopy Bridges have become a useful tool for underpasses and overpasses of terrestrial wildlife worldwide to connect them across fragmented landscapes. 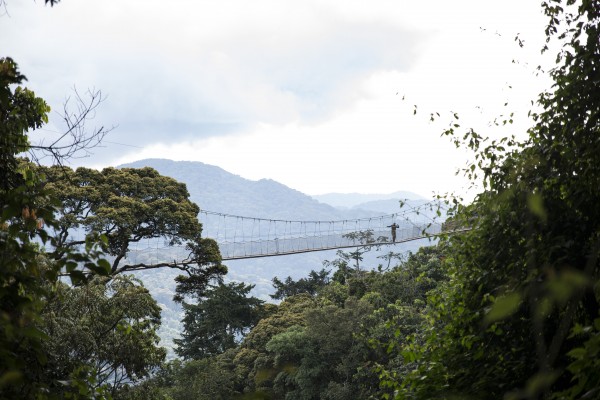 (Photo: Wikimedia Commons)
The simple and practical aerial bridges or Rainforest Canopy Bridges have become a useful tool for underpasses and overpasses of terrestrial wildlife all over the globe, to help connect wildlife across fragmented habitats.

Hainan Bawangling National Nature Reserve, home to the world’s 30 remaining Hainan gibbon, was severely damaged in the July 2014 Super Typhoon Rammasun. The rare primate’s habitat turned into deep gullies turning tree-dwelling gibbons to leap across 50 feet to get from one area to another.

The gibbons would manage to grab hold of a tip a frond to prevent itself from falling. Constant use of the frond caused the frond to fray and droop, threatening the gibbons to crash to the ground.

Bosco Chan, the Hainan gibbon conservation project manager, knew from there that he had to aerial bridges soon.

The team hired professional tree climbers to install a simple bridge, measuring 33 feet at its highest point. The bridge is made up of two parallel mountaineering-grade ropes.

The total cost of installation and materials of the bridge cost $5,000.

For five months, the gibbon tried to figure out what the structure was. But eventually, they learned the ropes and used the bridge regularly to move through several trees.

Chan and his colleagues’ have a growing body of evidence showing that artificial bridges are useful for helping arboreal animals move across fragmented landscapes.

In Peru, the U.K., India, Kenya, Brazil, Australia, and other countries, aerial bridges have helped various animals: marsupial gliders, squirrels, sloths, and capuchin monkeys traverse from one place to another with ease.

According to Fernanda Abra, a postdoctoral researcher at the Smithsonian Conservation Biology Institute, different species or habitats may also require various installation applications. For example, Gibbons prefers a specific design: two parallel ropes that work well for gibbons but may not be applicable to spider monkey.

Next year, Abra will test the artificial bridges to help various species cross hundreds of miles of highway traversing through the Amazon forest. She will compare two designs: a single large rope and a two-dimensional rope lattice to help pied tamarins and Guiana spider monkeys cross highways through Amazon forests. The two species that are regularly killed by cars are the pass-through highways.

Waimiri Atroari tribe, the land whose roads cut through, is willing to help Abra in locating the best places to install the bridges and maintain the structures even after her study. The tribe has also expressed interest in learning how to build the bridge.

The Waimiri Atroari tribe wanted to avoid roadkills as these animals are their meat; thus, road kills are a waste of their food source.

In West Java, Anna Nekaris, a primate conservationist at Oxford Brookes University in England, built bridges for slow loris. Still, she had a problem with its sustainability as farmers in the area tend to disregard it. She initially installed industrial rubber ropes. Later, she negotiated with farmers to help maintain the aerial bridge by changing the rubber to PVC pipes. The pipes were designed so that it would serve as loris’ bridge and irrigation sources for farmers. It also became an opportunity for Nekaris to promote the protection of the sloth in the community.

READ NEXT: Rotational Grazing Resisted by Cattle Ranchers Due to Challenges Faced by Livestock Producers Regarding Labor and Water

YouTube suspends OANN for a week after it posted fake Covid-19 cure
China is outpacing the U.S. when it comes to tackling climate change — here’s how it happened
Nature journals reveal terms of landmark open-access option
Apple security chief accused of bribing officers with iPads in exchange for concealed gun permits
Could green hydrogen be key to a carbon-free economy?