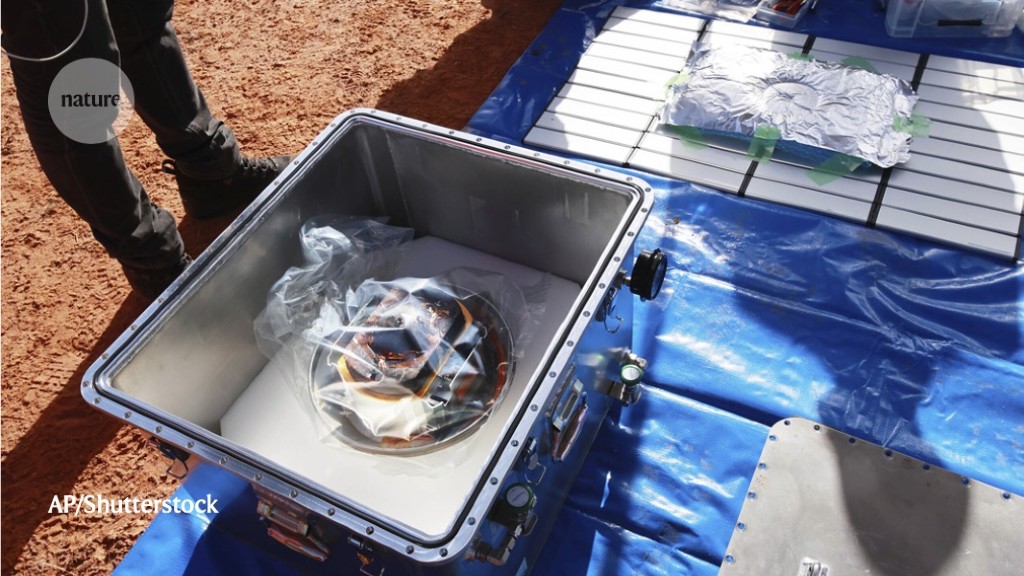 Japan’s mission to bring asteroid dust back to Earth has succeeded. The Japan Aerospace Exploration Agency (JAXA) confirmed on 14 December that a capsule from the spacecraft Hayabusa2, which landed in an Australian desert last week, contained black grains from asteroid Ryugu. It is only the second time that scientists have returned material from an asteroid.

Hayabusa2 collected the samples during a year and a half of poking and prodding Ryugu — a small asteroid shaped like a squashed sphere, peppered with giant boulders. Ryugu is a C-type, or carbon-rich, asteroid, which scientists think contains organic and hydrated minerals preserved from as far back as 4.6 billion years ago. The samples could help to explain how Earth became covered with water. Scientists think water came on asteroids or similar planetary bodies from the outer regions of the Solar System.

“The samples containing precious asteroid material will provide scientists with key information about the formation of the Solar System,” says Ed Kruzins, director of the Canberra Deep Space Communication Complex at the Commonwealth Scientific and Industrial Research Organisation, which helped to track the spacecraft and its encounter with the asteroid.

A week after granting an emergency-use authorization for the country’s first COVID‑19 vaccine, US regulators have followed with a second: another RNA vaccine, made by Moderna of Cambridge, Massachusetts.

The authorization came after a panel of external advisers to the US Food and Drug Administration (FDA) voted to recommend use of the vaccine on 17 December. A similar vaccine made by Pfizer of New York City and BioNTech of Mainz, Germany, had already received emergency authorization from US and UK regulators. The green light is a first for Moderna, a ten-year-old biotechnology company that pledged to revolutionize medicine by harnessing RNA in therapies, but had yet to get a drug or vaccine into the clinic.

FDA advisers spent much of the 17 December meeting discussing when and how to offer a vaccine to participants in the placebo arm of Moderna’s trial after authorization. Once a coronavirus vaccine becomes available, participants might choose to leave the trial to guarantee that they can get a jab. Maintaining the integrity of clinical trials — to collect data on long-term safety and the duration of protection — is a looming challenge for developers.

The open-access journal eLife has unveiled plans to introduce a new publishing model. Starting next July, the journal will adopt a “publish, then review” policy, and will make all of its peer-review reports publicly available.

Under the policy, which the journal announced on 1 December (M. B. Eisen et al. eLife 9, e64910; 2020), eLife will only review and publish papers that have already been posted on a preprint server, such as bioRxiv, medRxiv or arXiv. Submitted papers that aren’t already on preprint servers will be posted on bioRxiv or medRxiv.

One of the driving forces behind the policy change was an internal analysis, which revealed that around 70% of the papers reviewed by eLife during May, June and July 2020 had already been posted as preprints.

The new policy won’t come into effect right away. Over the next six months, authors will be able to opt out of posting their submitted manuscripts as preprints, but will be asked to explain the reason.

eLife also plans to start posting all of its peer-review reports on preprint servers, whether or not a paper is accepted for publication. The authors of rejected papers will be allowed to delay the posting of their reviews until their articles are accepted elsewhere. The journal is developing a platform, Sciety, for sharing public peer reviews.