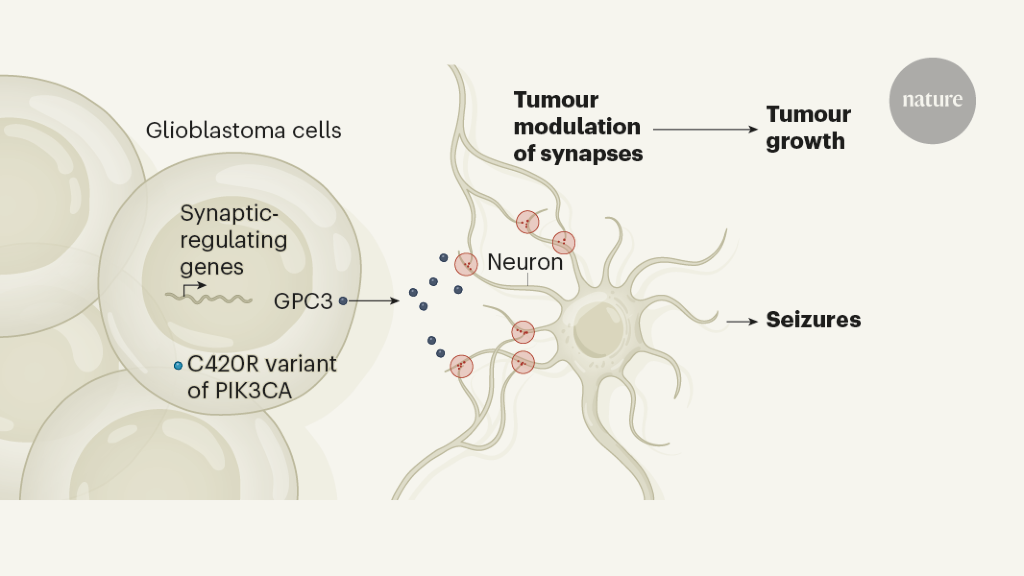 A type of non-neuronal brain cell called a glial cell can give rise to a lethal cancer called glioblastoma1. Half of the cells in the human brain are glial cells, which normally act to support the function and communication of neurons2. Yet despite decades of research, there are no existing treatments for glioblastoma that substantially increase the survival time of people with such tumours. Writing in Nature, Yu et al.3 report their analysis of the effects on the brain of certain glioblastoma-associated mutations. These insights might open up new strategies for anticancer research. 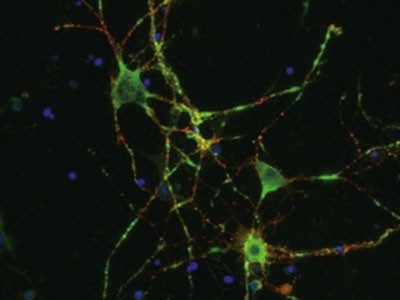 DNA sequencing of cancers has identified many tumour-associated mutations. However, it is a challenge to determine which of these mutations have a causal role in tumour development and growth, and which have no effect. Moreover, some mutations can be context dependent, such that the same mutation might have differing effects depending on the type of tumour and its microenvironment. It is hard to predict whether different mutations (variants) of the same gene will lead to the same outcome in different tumour types.

Yu and colleagues tackled these issues by studying the RTK–RAS–PI3K signalling pathway in glioblastoma. This pathway is altered in 90% of glioblastomas4,5, and mutations in it boost cell division and tumour growth. The authors focused on mutations in the gene encoding the enzyme PIK3CA — a pathway component that is often abnormal in human glioblastomas.

The authors generated mouse models of glioblastoma, and mutated genes in the RTK–RAS–PI3K pathway using the gene-editing tool CRISPR–Cas9, which resulted in tumour growth. Yu et al. then engineered animals to express PIK3CA variants that are found in human glioblastomas (Fig. 1). This revealed that many of the tested variants made tumours more aggressive and rapidly lethal. This was the case both for known variants and for others that had not previously been associated with a role in glioblastoma.

Yu and colleagues studied whether alterations in the enzymatic activity of PIK3CA variants might explain how they accelerate glioblastoma progression. Surprisingly, the activity of PIK3CA was not always linked to an effect on tumour growth — some variants strongly increased enzyme activity, whereas others had a much milder effect. To investigate other mechanisms that might explain the effect on tumour growth, the authors performed RNA sequencing of tumour cells. Most PIK3CA variants had patterns of altered gene expression that were similar to each other in the animals’ tumours, but different from the pattern in healthy tissue. However, two variants (named C420R and H1047R) had distinctive patterns compared with each other and with the other variants. Tumours containing either of these two variants showed abnormally altered expression of hundreds of genes that regulate synapses (structures that connect neurons). C420R and H1047R were also each associated with alterations in different categories of synapse-regulating gene.

Seizures are caused by a rise in neuronal activity and are often an early symptom of glioblastoma6. This effect might be driven by an abnormal increase in the connectivity of excitatory synapses (those that drive neuronal activity) and a decrease in the connectivity of inhibitory synapses (which decrease neuronal activity). Yu and colleagues report that mice with tumours that express C420R or H1047R variants had seizures, whereas a PIK3CA variant termed R88Q that does not alter synapse-related gene expression in tumours did not induce seizures. Compared with tumours expressing the R88Q variant, those expressing C420R or H1047R showed an increase in the number of excitatory synapses and a decrease in the number of inhibitory synapses in tissue surrounding the mouse tumours. This pattern might explain how certain PIK3CA variants drive neuronal excitability and seizures.

When the authors engineered mouse brains to express increased amounts of the PIK3CA variants (without expressing other mutations that drive glioblastoma), they found that, in the absence of glioblastoma, H1047R drives seizures whereas C420R and R88Q do not. This indicates that H1047R acts ‘cell autonomously’ to regulate neuronal excitability — meaning that it functions within the cell itself rather than acting on a neighbouring cell.

To determine how C420R might drive seizures, the authors expressed PIK3CA variants in a type of glial cell called an astrocyte that enhances the formation of synapses between neurons by releasing secreted molecules. The authors cultured astrocytes in vitro with neurons and assessed the astrocytes’ ability to induce neuronal synapse formation. Astrocytes that expressed C420R induced higher than normal synaptic formation between neurons, whereas astrocytes that expressed H1047R had no such effect. This suggests that C420R changes the properties of glioblastoma cells to make them induce the formation of synapses between the neurons that they contact. 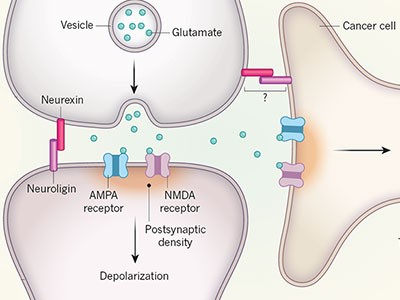 Further analysis of RNA sequencing data by the authors revealed that tumour cells that expressed C420R showed increased expression of known synapse-regulating factors that are secreted by astrocytes. These included members of the glypican family (part of a group of sugar-containing proteins called proteoglycans), which can induce the formation of excitatory synapses in the brain7.

Yu and colleagues’ work supports growing evidence that tumour cells interact with their neighbouring healthy cells to alter brain function. Recent work has revealed that cells of the glioblastoma itself can form a synapse with surrounding neurons (in such synapses, the tumour has postsynaptic structures and the neuron forms presynaptic structures), and that blocking this synaptic input to the glioblastoma decreases tumour growth8–10. Yu et al. now reveal how a glioblastoma can remodel connections between its neighbouring neurons, and report that the underlying mechanism differs depending on the specific PIK3CA variant involved. It will be interesting to determine in future studies whether the same synapse-promoting signals are responsible for regulating the synapses that form between a tumour and its neighbouring neurons, and for regulating synapses that form between neurons surrounding the tumour. This is an intriguing matter, because glypicans regulate neuronal synapse formation through what are known as AMPA receptors, and the synapses that form between neurons and glioblastoma cells use AMPA receptors for signalling8,9.

Abnormally high expression of glypican family members occurs in various types of tumour, including liver and pancreatic cancer11,12. In those cases, glypicans are thought to bind to and regulate the signalling of growth factors that promote tumour growth. Glypicans are clearly of interest in trying to understand many disorders, and efforts being made to block their function in other cancers might suggest approaches worth testing for use in glioblastoma treatments11,12.