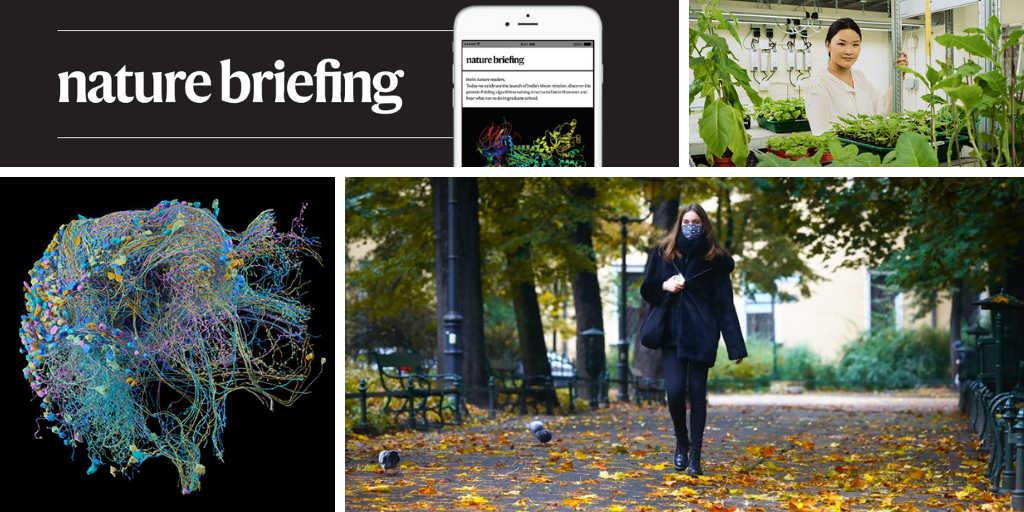 Artificial intelligence and improved microscopy make it feasible to mapping the ‘connectome’ — the neural wiring of the brain — at ever-higher resolution feasible. In September, researchers working on Drosophila fruit flies reported the largest reconstruction so far: 25,000 neurons in the hemibrain, a tiny cube of tissue representing 40% of the fly’s brain. Next, scientists are targeting the mouse: a project with a data set on the scale of an exabyte (one billion gigabytes). These are not mere exercises in big biology — researchers hope to tap these data sets to learn how experiences are stored in the brain, with potential insights into autism, schizophrenia and other ‘connectopathies’.

Growing evidence suggests that there will be bigger COVID-19 outbreaks in winter, on the basis of what is known about how the virus spreads and how people behave in colder months. Laboratory experiments have revealed that SARS-CoV-2 favours cold, dry conditions, particularly out of direct sunlight. And during winter, people will more often interact indoors in places with poor ventilation. But overall, seasonal variability is “a small drop in the pan” compared with the main driver of increased spread, which is that so many people are vulnerable to infection — so people in places that are going into summer shouldn’t be complacent either. “By far the biggest factor that will affect the size of an outbreak will be control measures such as social distancing and mask wearing,” says epidemiologist Rachel Baker.

A prototype super-white paint is so reflective that it can cool a surface down to below the surrounding air temperature. The paint harnesses a natural heat-shedding effect known as passive radiative cooling. The paint absorbs and then emits infrared energy at specific wavelengths, which pass straight through the atmosphere and into space — effectively linking it to an inexhaustible heat sink. During tests in Indiana, the paint cooled a sample to 10 ℃ below the ambient temperature at night and at least 1.7 ℃ below at high noon.

Arctic sea ice in Siberia’s Laptev Sea has not yet started freezing in late October, the latest date since records began. Climate scientists say the delay is due to a period of protracted warm temperatures in northern Russia and balmy Atlantic currents pushing into the region. Ice formed at the Laptev Sea drifts westward, carrying nutrients across the Arctic. Delays could mean fewer nutrients for Arctic plankton, and reduced capacity to remove carbon dioxide from the atmosphere.

Quanta has reimagined how to represent the standard model of particle physics in a delightfully clear 3D graphic. Everything’s there, from amusingly named quarks to spin, handedness and charge. Plus, the authors walk you through how the theory builds up the picture in simple steps.

The Nobel Prize does not reflect how science is done, argues writer and historian of science Joshua Roebke — “it merely hardens the fiction of individual genius”. Using examples from biology and physics, Roebke unpicks the fiction of the ‘great man of science’ and suggests a broader focus on other contributors who might be more deserving of our adulation. “Science is great despite some of the wretched men who helped make it,” he writes. “It would be even greater if we reckoned with its racist and misogynist past, reclaimed its forgotten players, and acknowledged how science is collectively done.”

Material scientists have discovered what makes the diabolical ironclad beetle (Phloeodes diabolicus) so strong that it can survive being run over by a car. They talk to the Nature Podcast about what makes this amazing creature almost uncrushable and how it could inspire stronger materials. Plus, the first human challenge trial to test a COVID-19 vaccine and how southern elephant seals helped to identify supercooled seawater.

The Nature Podcast has been shortlisted for a Lovie Award! If you’re a fan of the show, you can help it win a People’s Lovie by voting here.

Molecular immunologist Audrey Teh works in a greenhouse lab on top of a London hospital, where she grows tobacco plants to produce antibodies for drug development. After losing 90% of the plants during the pandemic lockdown between March and June, Teh’s experiments are back up and running. “Tobacco has a horrible health legacy,” notes Teh. “It would be nice to reform this plant’s image by engineering it to produce cancer treatments.” (Nature | 3 min read)