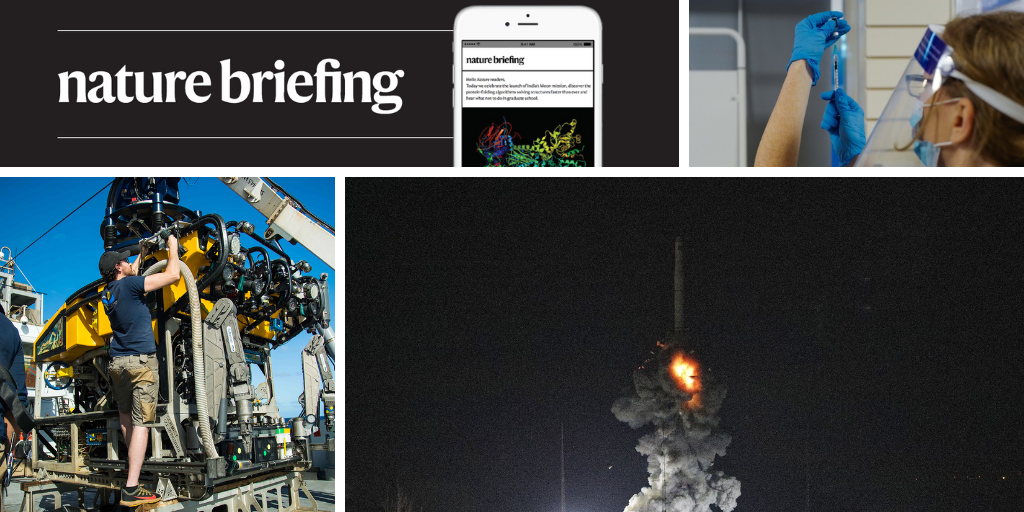 China has successfully launched a twin-satellite mission to investigate the most-energetic events in the cosmos. The National Space Science Center of the Chinese Academy of Sciences launched its Gravitational Wave High-energy Electromagnetic Counterpart All-sky Monitor (GECAM) earlier today. GECAM’s two small satellites have taken up identical orbits on opposite sides of Earth. From there, they can watch the whole sky for fast-radio bursts, high-energy neutrinos and magnetars.

An independent panel that advises the US Food and Drug Administration (FDA) has recommended that the country give emergency authorization to the Pfizer—BioNTech COVID vaccine. The results from a clinical trial of the vaccine were published yesterday in The New England Journal of Medicine. The ruling is expected to lead to quick action by the FDA to authorize the jab. Seen alongside an increasing number of vaccine authorizations worldwide, the news heralds a new phase in the fight against the coronavirus pandemic. Scientists will begin sifting through reports from the hundreds of thousands of people who get the first jabs, in search of potential — and probably rare — side effects, and then working out whether those events are likely to have been caused by the vaccine.

An Australian COVID-19 vaccine will be abandoned after participants in a trial returned false-positive HIV tests. The vaccine, developed by the University of Queensland with biotechnology company CSL, contained a small protein fragment from the human immunodeficiency virus (HIV), which posed no risk to human health. However, some trial participants developed antibodies to the fragment, which could interfere with HIV screening tests that detect antibodies, giving a false positive result. At the beginning of the trial, the risk of false positives was thought to be low. “Everyone was very surprised at the unexpected prevalence of the false positive,” says Brendan Murphy, secretary of the Australian Department of Health.

Beyond its active ingredient of modified messenger RNA, the Pfizer—BioNTech vaccine also contains good old sugar and salt. Discover the rest of the leading COVID vaccine’s ingredients and what they do.

Lucy Withers, who lives in New Zealand, describes what life is like in a country where the pandemic has been deftly handled, for the benefit of those of us in places where things are far from normal. (BuzzFeed News | 11 min read)

Science at the Arecibo radio telescope in Puerto Rico came to an end last week when the instrument platform fell 137 metres and crashed onto the reflector dish below. But the world’s second-largest telescope leaves behind a proud legacy. Three scientists reflect on some of the key advances the telescope made possible since it was built in 1963. These include the first high-resolution radar images of Venus, the first discovery of a fast radio burst and countless insights into pulsars. Because of its size, Arecibo also detected faint traces of hydrogen in distant galaxies, which contributed to scientists’ understanding of how they form.

Living things depend on water, but it breaks down DNA and other key molecules. So how did the earliest cells deal with the water paradox? The Nature Podcast looks at evidence that life arose on land environments, in places that were alternately wet and dry. Plus, the Hayabusa2 mission successfully delivers a small cargo of asteroid material to Earth, and a team in China claims to have made the first definitive demonstration of computational ‘quantum advantage’.

Author Stewart C. Baker ponders the imperfect, transient nature of life in Five things I hate about Phobos, the latest short story for Nature’s Futures series. A playful cynicism propels this tale of friendship, unearthly beauty and the acceptance of how things are.

Andrew Robinson and Sara Abdulla’s pick of the top five science books to read this week includes how borders make us ill, decolonizing museums and the wolves of Yellowstone.

Working on an ocean research vessel means John Fulmer is one of the first to see intriguing discoveries. On the ship, science never sleeps, says Fulmer. “I work 12-hour shifts every day for 6-month stretches, with no days off, and I’m on call all the time. I’m just starting six months on leave, but sometimes I’ll tune in to the dives. It’s exciting stuff.” (Nature | 3 min read)

The auto-captioning software struggled with some of the jargon at the American Geophysical Union Fall Meeting, notes paleomagnetism researcher Katie Bristol — this was supposed to say “higher coercivities”. (Twitter)