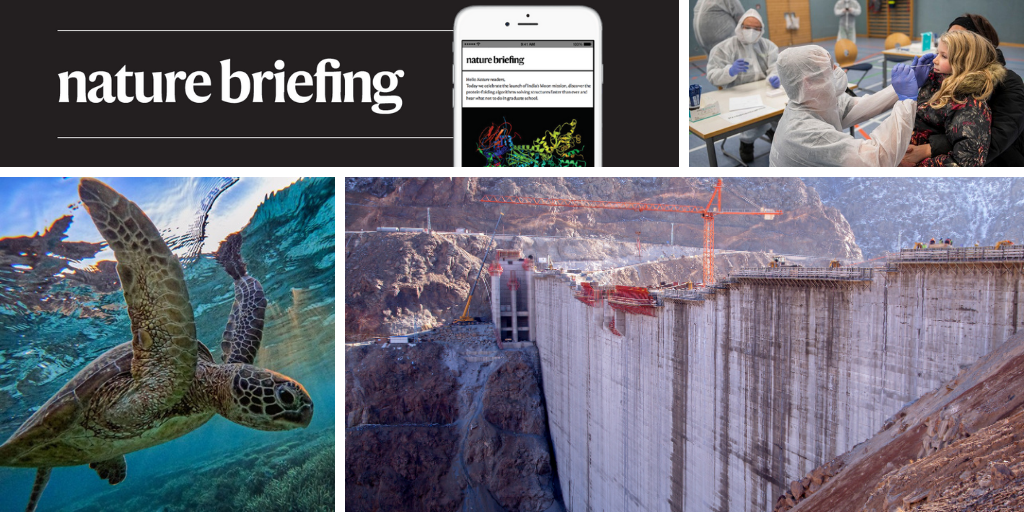 The mass of human-made things just exceeded Earth’s total living biomass. Researchers compared the estimated dry weight of all living things on our planet — approximately 1.1 teratonnes, not including their water — with the estimated mass of all of our stuff, which is dominated by concrete and aggregates (such as gravel). With anthropogenic mass now doubling roughly every 20 years, the cross-over point has just been reached, give or take 6 years. Our buildings and infrastructure outweigh all the world’s trees and shrubs, and our plastic outweighs the dry weight of all animals. Of course, not all human-made things are created equal, whether in terms of their benefit to people or their environmental cost. “It’s not that infrastructure per se is bad,” says environmental anthropologist Eduardo Brondizio. “It’s how we do infrastructure that is the problem.”

An experimental universal flu vaccine has shown good results in a small early trial. The vaccine targets the bottom part, or stalk, of the haemagglutinin (HA) proteins that stud the surfaces of influenza viruses. HA’s stalk is less prone to the mutations and gene swaps that make it so difficult for current vaccines, which target the head, to ward off all strains of the flu. The study shows for the first time that “you can develop a vaccine strategy that produces stalk-reactive antibodies in humans”, says virologist Florian Krammer.

A growing body of evidence suggests why young children account for only a small percentage of COVID-19 infections: their immune systems seem better equipped to eliminate SARS-CoV-2 than are adults’. Some children who do get infected never test positive for the virus on a standard RNA test, even if they develop symptoms and have antibodies specific to SARS-CoV-2. Their immune system sees the virus “and it just mounts this really quick and effective immune response that shuts it down, before it has a chance to replicate to the point that it comes up positive on the swab diagnostic test”, says immunologist Melanie Neeland. The source of children’s immune advantage is thought to arise from one — or several — of these factors:

• Children’s T cells are untrained, so they might have a greater capacity to respond to new viruses.

• Children might have a strong innate immune response from birth, although that raises the question of why it isn’t seen with other viruses that can cause severe disease in children.

• It could be thanks to the protection of antibodies to seasonal common-cold coronaviruses, which run rampant in children.

• Kids might receive a smaller dose when exposed to SARS-CoV-2, because their noses contain fewer of the ACE2 receptors that the virus uses to gain access.

British regulators have recommended that people with a history of severe allergies should not get the Pfizer—BioNTech COVID vaccine. The advice came after two health workers had allergic reactions shortly after having the jab, which was rolled out to thousands of people in the United Kingdom on Tuesday. Both people have a history of serious allergies and carry adrenaline pens, and both have recovered. The warning “is common with new vaccines”, says Stephen Powis, the medical director for the National Health Service in England. “The fact that we know so soon about these two allergic reactions and that the regulator has acted on this to issue precautionary advice shows that this monitoring system is working well,” says immunologist Peter Openshaw.

Supriya Sharma, chief medical adviser of Canada’s health regulator, announces that the country has approved the Pfizer—BioNTech COVID vaccine. It will be rolled out to the first recipients within days. (Global News | 5 min read)

At the end of last month, the European Commission announced that its grant recipients will be required to incorporate sex and gender analyses into the design of research studies. The policy will affect researchers applying for grants that are part of the commission’s 7-year, 85-billion (US$100-billion) Horizon Europe programme, which is due to begin next year. “The inclusion of sex and gender analyses can also be revelatory,” notes a Nature editorial, and not accounting for it has been catastrophic in some cases, such as when women have not been included in drug safety trials.

Grab a hot toddy (or a cold bevvy — I see you, Southern hemisphere!) and cosy up with the coolest molecules reported this year, as chosen by Chemical & Engineering News. From a 16-nanometre-wide molecular wheel — the largest aromatic ring ever synthesized — to a molecular machine that uses redox chemistry to thread rings two at a time onto a polymer chain, these molecules (and their accompanying diagrams) are the perfect reminder of the delights of discovery.

One of the knottiest problems faced by international agreements for tackling climate change is how to allocate mitigation efforts fairly across nations, without increasing the overall global cost, and without asking poor countries to accept large amounts of financial assistance that raise concerns about infringements of national sovereignty. Computational models show that moderate deviations from uniform carbon pricing could achieve the goal without straining either the economies or sovereignty of nations, writes international-affairs researcher Wei Peng. “The authors’ findings highlight an advantage of the Paris [agreement] approach,” writes Peng. “An equitable outcome can still be achieved when international transfers are reduced.”

What You Need to Know About Ocean Worlds
Parker Solar Probe Countdown to T-Zero in 4K: Flying Faster, Hotter and Closer Than Ever to the Sun
How It’s Made: Natural Baking Soda
How It’s Made: Apple Cider
The Life and Death of a Planetary System