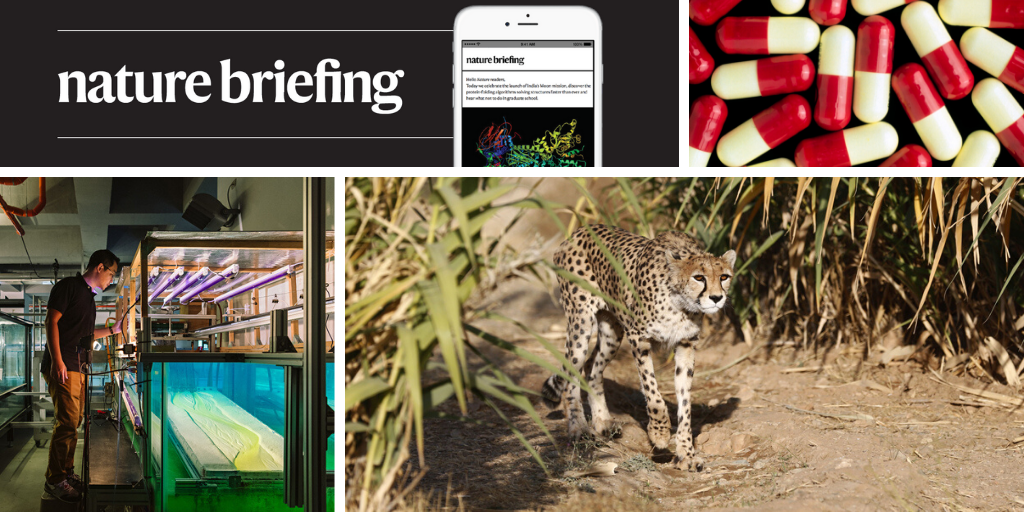 A secretive court in Iran has reportedly sentenced six environmental researchers charged with spying to between six and ten years in prison. When the scientists were arrested in early 2018, they were using camera traps to study endangered wildlife, including the Asiatic cheetah (Acinonyx jubatus venaticus), in national parks and other locations in Iran. Two more researchers from the group have yet to be sentenced, and a ninth has already died in jail. The case has prompted an outcry from the international community.

Google and one of the largest health-care networks in the United States are embroiled in a data-privacy controversy that researchers fear could jeopardize public trust in data-sharing practices and, potentially, academic studies. At issue is a project dubbed Nightingale that gives Google access to the health-care information of tens of millions of people without their knowledge. The patients were treated at facilities run by the health network Ascension. Google and Ascension say that they abided by US laws to protect health-care information. But the lack of informed consent — and the fact that identifiable data weren’t scrubbed from the records — has caused US lawmakers to cry foul.

Barry Myers, US President Donald Trump’s pick to lead the National Oceanic and Atmospheric Administration (NOAA), has withdrawn citing health concerns. Myers’s nomination has languished in the US Senate for more than two years. Opponents of his nomination raised concerns about his lack of scientific credentials and possible conflicts of interest. An attorney by training, Myers is the former chief executive of the commercial forecasting firm AccuWeather, where his brother is president and chairman.

Researchers must unite against the Environmental Protection Agency (EPA)’s attack on scientific evidence, argues a Nature editorial. Last week, The New York Times revealed that the agency’s leadership is still actively discussing a rule that could restrict the influence of foundational public-health studies. The revelation caused a crescendo of opposition from the United States’ scientific, medical and health communities. The scale and volume of this response should rattle the EPA’s leadership, and the response needs to get bigger and louder still, argues the editorial.

Scientists face an ethical dilemma over what to do with their wildlife cameras’ human by-catch. A study last year found that 90% of researchers had captured images of people in their camera traps. “I think that as these projects scale-up those conversations will be more important of how we’re using the human data,” says wildlife biologist Nyeema Harris, whose study on the critically endangered West African lions ended up also including observations on human activity in the wildlife preserve. “What does privacy look like? How does that translate into law enforcement? Is it fair? Is it equitable? Is it justifiable?”

Researchers looking for an ally against drug-resistant infections — which include some urinary tract infections and pneumonia — have turned to a bacterium that lives inside the guts of nematode worms. Photorhabdus helps the worms to paralyse their insect larvae prey, and it has the ability to fight off bacteria that want to share its hard-earned food. Molecular microbiologist Kim Lewis tells the Nature Podcast about the promise of antibiotics developed from bacteria that share a common enemy with humans.

Nature Index explores the effects of political instability and escalating trade tensions on US-China and UK-EU research collaborations, and highlights the most successful ‘big science’ players in high-energy physics, genomics and oncology.

• Connections between scientists in the United States and China are proving resilient to government tensions, economic tariffs and fears of academic espionage.

• Brexit’s shadow hangs over the United Kingdom and European Union, and the damage to research partnerships is showing. “We have seen a dramatic drop in the number of leading researchers who want to come to the UK,” says Venki Ramakrishnan, president of the Royal Society.

• Geopolitics aside, who’s running the most successful high-energy physics, life sciences and genomics research?This infographic reveals the top three, plus where in the world their strongest collaborators are.

A hard-hitting new book explores how stigma blights the lives of those who experience it and how public-health efforts can unwittingly fuel it. But the book fails to explore how intersecting stigmas — or example, a person with HIV who works in the sex industry and injects drugs — can compound bias and discrimination, says reviewer Julie Pulerwitz.

Andrew Robinson’s pick of the top five science books to read this week includes the art of rest, hive minds, and traversing Canada.

Sedimentologist Steven Yueh Jen Lai uses giant tanks filled with very fine sand and fluorescent-dyed water to visualize erosion and deposition on the continental slope — where the continental shelf dips into the sea. “During an experiment, this means that the lab is like a darkroom lit up by fluorescent water,” says Lai. “It’s a wonderful, vivid experience when you see the phenomenon that you generated unfold.”

Whether it’s the hubbub in an open-plan office or your favourite study music, noise isn’t good for tasks such as remembering things in order and mental arithmetic, says psychologist Nick Perham. (BBC)