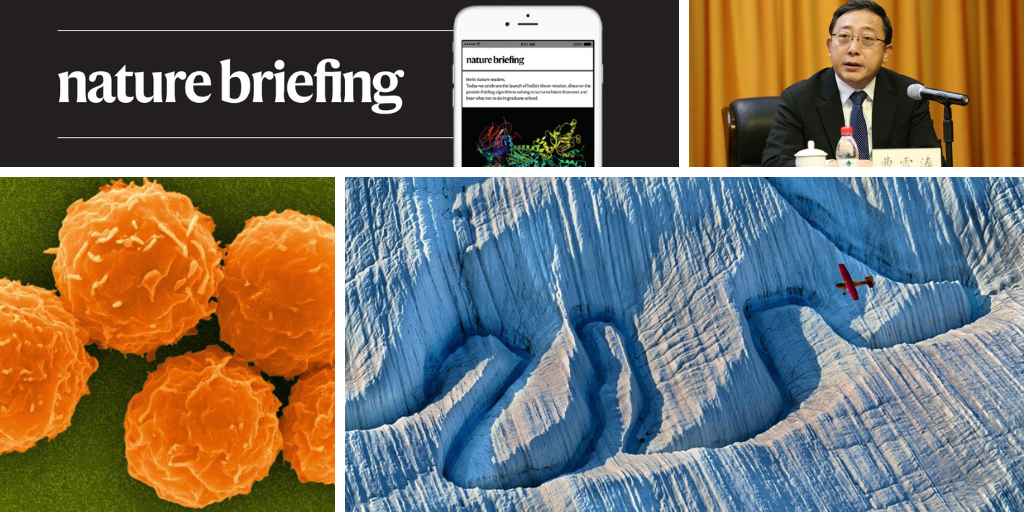 Common stem-cell therapies improve heart function — but not by becoming heart-muscle cells themselves. Instead, research in mice shows that they trigger immune cells called macrophages to repair connective tissue in damaged regions of the organ. Swapping the stem cells with an inflammation-inducing chemical — or even bits of dead cells — worked, too, indicating that inflammation set off by the immune system drives the repair mechanism. The findings could have significant implications for the future of stem-cell therapies in humans, a multibillion dollar industry.

Researchers have created a strain of the bacterium Escherichia coli that grows by consuming carbon dioxide instead of sugars or other organic molecules. The achievement is a milestone because it drastically alters the inner workings of one of biology’s most popular model organisms. And in the future, CO2-eating E. coli could be used to make organic carbon molecules for biofuels or food, while removing the gas from the air.

China’s education ministry is investigating articles authored by high-profile immunologist Cao Xuetao, following suggestions that dozens of his papers contain potentially problematic images. Four journals also say they are scrutinizing papers co-authored by Cao, who has been a prominent voice for strengthening research integrity in China. The questionable images were highlighted by top Twitter image sleuth Elisabeth Bik and others. Cao says that his group is investigating the papers in question, and he is confident that the issues raised do not affect the papers’ conclusions or reproducibility.

A study of protein databases shows that discoverers who are second to publish still end up getting a substantial portion of the recognition. Scooped papers receive only about one-quarter fewer citations than do papers that were the first to report the same discovery, according to an analysis of more than 1,600 ‘races’ to determine the detailed 3D shape, or structure, of proteins and other biomolecules.

Evidence is mounting that abrupt and irreversible shifts in the Earth system — such as the loss of the Amazon rainforest or the West Antarctic ice sheet — are more likely than was thought. At worst, a global cascade of these tipping points could lead to a new, less habitable, ‘hothouse’ climate state. Seven climate scientists look at the evidence for tipping points, explore the effects and urge an emergency response.

PhD students in China face outsized challenges as they try to complete their degrees, according to Nature’s fifth biennial survey of PhD students. The self-selecting survey was translated into Chinese as part of an effort to increase participation inside the country. Only 55% of the 690 students in China who responded to the survey said that they were at least partially satisfied with their PhD experience, compared with 72% elsewhere.

Correspondence: your letters to Nature

Russian biologist Denis Rebrikov is keen to start creating more ‘CRISPR babies’ — but the consensus among geneticists, clinicians and bioethicists in Russia is that human genome editing is “premature”. A letter signed by 15 scientists, led by Elena Grebenshchikova of the Russian Academy of Sciences, says that they agree with the World Health Organization and other international bodies about the need for a common ethical framework — as does the Russian ministry of health.

Scientists meet as equals in Jordan

Look to Jordan for an example of how to connect junior and senior scientists, says Rana Dajani, president of the Society for the Advancement of Science and Technology in the Arab World. The Phi Science Institute is a network of young scientists that holds an annual conference at which senior and junior scientists and students communicate with one another on an equal footing.

The US Environmental Protection Agency (EPA) must drop its proposed ‘transparency’ rules, argues a joint statement from six of the world’s leading science journals. The editors-in-chief of Science, Nature, PLoS journals, Proceedings of the National Academy of Sciences, Cell Press and The Lancet call on the EPA to ensure that the scientific data used in decision-making are the best available.

Correspondence is published every week in Nature. For more info on writing one yourself, please see the guidance on nature.com. (Your feedback on this newsletter is always welcome at briefing@nature.com, but won’t be considered for publication in Nature.)

Modern humans aren’t necessarily to blame for the extinction of Neanderthals, says archaeologist Krist Vaesen — Neanderthals’ small population size might have doomed them anyway. (The Guardian)Reference: PLOS One paper

What You Need to Know About Ocean Worlds
Parker Solar Probe Countdown to T-Zero in 4K: Flying Faster, Hotter and Closer Than Ever to the Sun
The Life and Death of a Planetary System
How It’s Made: Natural Baking Soda
How It’s Made: Apple Cider