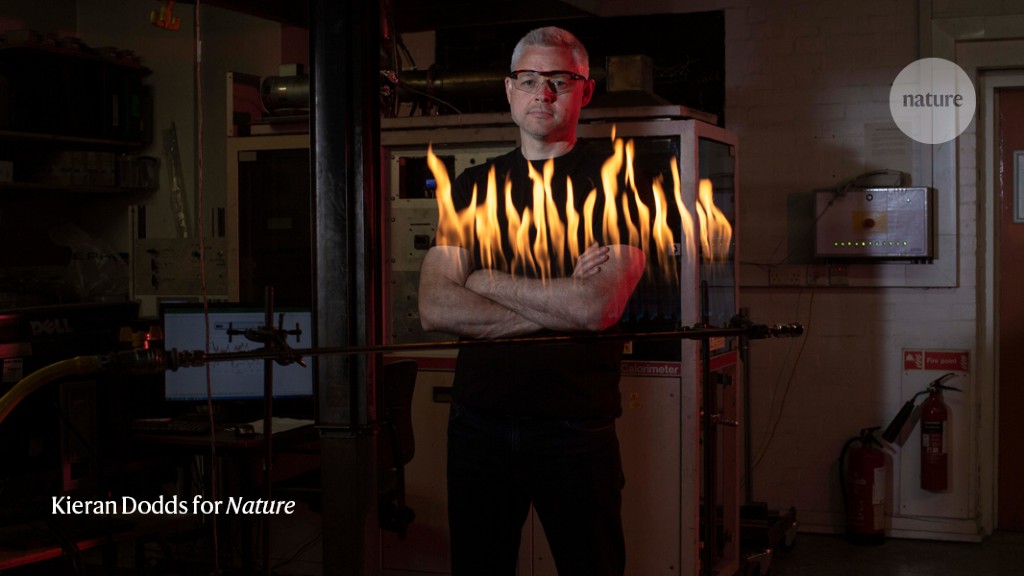 As chair of fire and structures at the University of Edinburgh, UK, I work in three laboratory spaces. We do everything from small-scale experiments on various building materials to see how easily they ignite or spread fire, to large-scale analyses of the load-bearing systems of skyscrapers using complex computer simulations. Around 2008, my group moved into fire science — the study of how things burn, from ignition to growth of the fire and all of the underlying physics.

There’s a trend towards using engineered timber for buildings because, as a material, it is considered more sustainable, and it takes less carbon to produce than does concrete, steel or masonry. But, unlike those materials, timber burns. This is a total change of philosophy in modern construction, because the building itself is made out of fuel.

Here, I’m standing where we set stuff on fire beneath a large steel ventilation hood. We might burn sofas or Christmas trees to understand their combustion. We measure how much energy is produced (fires have a wattage, like a light bulb), the heat-release rate, the toxicity of gases coming off and the opacity of the smoke. It’s important to know the amount and rate of heat energy that is released because that tells you whether the fire’s likely to spread: how much heat does it take to ignite a nearby object?

I’m behind a ‘fire sword’ — a stainless-steel pipe with holes to vent propane gas. It allows us to expose objects to impinging flames while controlling the flames’ direction and magnitude, and we can measure the amount of energy we are putting into the system. Then, we can calculate how dangerous the burning object is.

Ultimately, we’re studying fire to prevent tragedy. That image of a kid holding a stick in a campfire until it catches, pulling it out until it stops burning and then plunging it in again? That’s fundamentally the question we’re studying in timber buildings: how much heat is too much?