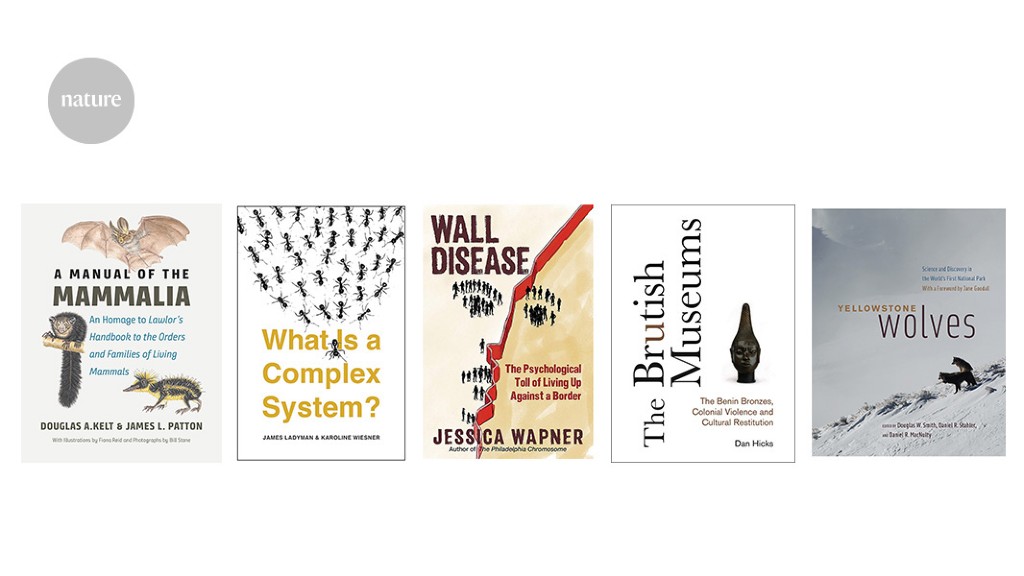 Since the Berlin Wall fell in 1989, border walls have multiplied, notes science journalist Jessica Wapner in her compelling, dispiriting, global survey. In the decade after the September 2001 terrorist attacks, 47 appeared worldwide; Wapner investigates their geography and psychological effects. “Wall disease” — a translation of Mauerkrankheit, coined in 1973 by a former Berlin psychiatrist who had abandoned East Germany for the West — consists of fear, isolation, a sense of immobility, financial insecurity and suspicion of “the other” on the far side.

This timely book echoes the British Museum’s decision this year to redisplay a bust of its founder with labels about his links to the slave trade. Dan Hicks is a curator at the Pitt Rivers Museum in Oxford, UK, which, like the British Museum, holds many prized objects murderously looted by colonial forces in 1897 from Benin, in what is now Nigeria. Rejecting the view of Oxford colleague John Boardman that “the rape proved to be a rescue”, Hicks vehemently advocates that “brutish” museums urgently begin restitution of stolen objects.

What Is a Complex System?

The Santa Fe Institute in New Mexico inaugurated the study of complex systems, but its founding workshops in 1984 did not define the topic. Even today there is no agreement on a definition, nor whether one is possible, remark philosopher of science James Ladyman and mathematician Karoline Wiesner. After a clear analysis of systems ranging from radiation to human brains, they conclude: there is no “single natural phenomenon of complexity”, but ‘complexity science’ does exist, rather than being “merely branches of different sciences”.

A Manual of the Mammalia

The subtitle of this comprehensive, lavishly illustrated reference book terms it “an homage” to Timothy Lawlor’s acclaimed Handbook to the Orders and Families of Living Mammals, which was published in 1979, revised, but out of date following Lawlor’s death in 2011. As wildlife ecologist Douglas Kelt and mammal curator James Patton note, Lawlor’s final edition featured about 4,170 species of mammal; today’s figure is 6,495. “Do not be overwhelmed”, they advise students, “simply revel in the diversity that is the Mammalia.”

Twenty-five years ago, the authors reintroduced wolves to Yellowstone National Park in Wyoming — the first deliberate return of an apex carnivore to a big ecosystem. Here, they relate what they’ve learnt of the animals’ predation, mating, play, genetics, disease and more, and their impact on other species and the landscape. Also detailed are the fraught history, politics and implications of rewilding. Glorious pictures bear witness to fragile gains. US President Donald Trump’s silver-anniversary gift? Rolling back protections on the wolves.

Can Shell help pilot a new era of sustainable aviation?
Google hit with its third antitrust lawsuit since October, this time by a bipartisan coalition of states
Sustainable shopping is healthy, even amid a pandemic
More people are doing their holiday shopping online and this trend is here to stay
Senate passes NASA authorization act