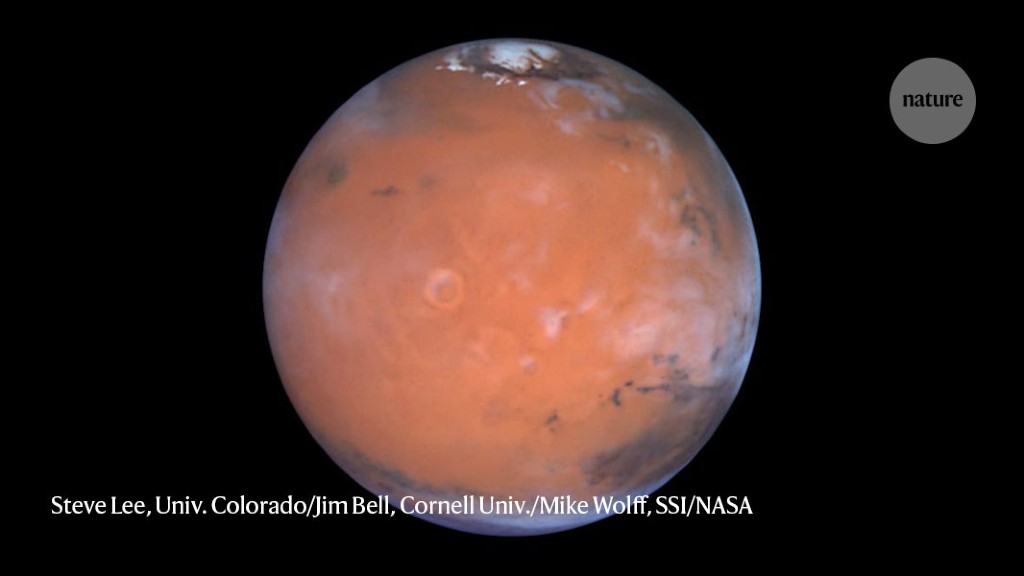 Two years ago, planetary scientists reported the discovery of a large saltwater lake under the ice at Mars’s south pole, a finding that was met with excitement and some scepticism. Now, researchers have confirmed the presence of that lake — and found three more.

The discovery, reported on 28 September in Nature Astronomy (S. E. Lauro et al. Nature Astron. https://doi.org/fb4h; 2020), was made using radar data from the European Space Agency’s Mars-orbiting spacecraft, called Mars Express. It follows the detection of a single subsurface lake in the same region in 2018 — which, if confirmed, would be the first body of liquid water ever detected on the red planet and a possible habitat for life.

The team used radar to probe the planet’s southern polar region. They detected some areas of high reflectivity that they say indicate bodies of liquid water trapped under more than one kilometre of Martian ice.

Although the latest finding supports the 2018 observation and involves much more data, some researchers remain sceptical that there is an adequate heat source to melt the ice, and are unconvinced that the identified regions are liquid water.

Nine months into the pandemic, the official global death toll has now exceeded one million people.

The milestone was hit on 28 September, but researchers warn that this figure probably vastly underestimates the actual number of people who have died from COVID-19 because of unreported deaths in countries where testing isn’t widespread.

How many more people will die in the coming months will depend on how governments respond to the pandemic, says Ali Mokdad, an epidemiologist at the University of Washington’s Institute for Health Metrics and Evaluation (IHME) in Seattle. Using COVID-19 data from different nations, the IHME projected the global impact of the pandemic under various scenarios. The researchers estimate that, if current trends continue, by January 2021 the total number of deaths will reach 2.5 million, a figure that could be cut to 1.8 million if every country adopts universal mask-wearing.

Under different conditions, the situation could worsen. If governments lift precautions such as social distancing, the death toll could reach 3.3 million by January, with around 72,700 people dying each day.

One of the world’s richest biomedical research organizations, the Howard Hughes Medical Institute (HHMI), said on 1 October that it will require scientists it funds to make papers open access (OA) as soon as they are published. Its previous policy allowed a delay of up to one year before results must be free to read.

The non-profit organization, based in Chevy Chase, Maryland, is only the second US funder to insist on immediate open access, after the Bill & Melinda Gates Foundation in Seattle, Washington. As part of the policy change, the HHMI has joined the coalition of funders and organizations behind Plan S, a European-led initiative that is pushing for research to be immediately accessible on publication.

The HHMI spent US$763 million on biomedical research in 2019 and supports around 4,750 scientists. Its new policy states that from 2022, HHMI researchers must either publish papers OA or deposit their accepted manuscripts in a repository openly under a liberal publishing licence.

It also will not pay OA publication fees in ‘hybrid’ journals that make some papers open and keep others behind paywalls, unless the journals have committed to transitioning to an OA business model “on a timeline acceptable to HHMI”. This policy mirrors that of Plan S, in which funders say they will pay OA publication fees only for hybrid journals that have signed ‘transformative contract agreements’, or are classed as ‘transformative journals’ because they have committed to increase their volume of OA content.