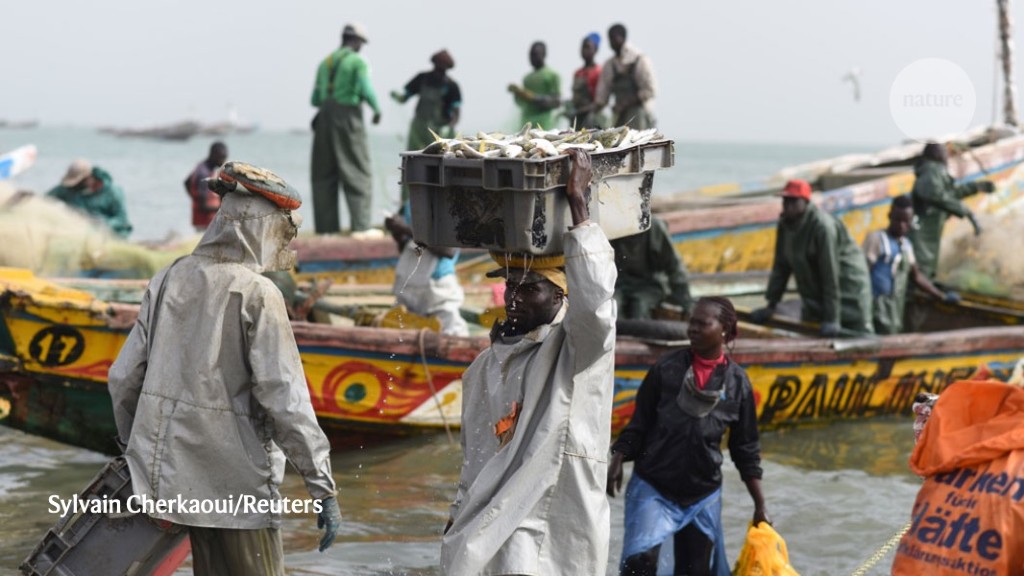 Fish are a source of micronutrients that help to prevent nutrient-deficiency diseases. For 43 countries, Hicks et al. mapped the relationship between the fish-derived nutrients available from fisheries’ catches and the prevalence of such diseases. Their data demonstrate that catches in some developing countries should be enough to meet the key micronutrient needs of their populations. However, in many developing tropical countries, a substantial proportion of local fish catches are either exported or processed locally to generate fishmeal that is then exported and used to feed farmed fish. Many of the local fisheries (pictured), which had traditionally supplied the regional markets, now instead supply fishmeal plants. This does not reduce the pressure on wild fish. Moreover, it deprives people on low incomes of previously affordable, nutritious local fish. Original research: Nature 574, 95–98 (2019).

Huntington’s disease is caused by an abnormally long stretch of glutamine amino-acid residues in the huntingtin (HTT) protein. Cells degrade the mutant huntingtin (mHTT) through autophagy — a clearance mechanism that involves engulfment of proteins by a vesicle called the autophagosome. Li et al. hypothesized that compounds that bind to both the mutant polyglutamine tract and the protein LC3B, which resides in the autophagosome, would lead to engulfment and enhanced clearance of mHTT. The authors conducted small-molecule screens to identify candidate compounds, and used wild-type HTT in a counter-screen to rule out compounds that bind to the normal version of the protein. They found encouraging evidence that four compounds could produce functional improvements in models of Huntington’s disease across three species. This therapeutic strategy might also be useful for other diseases involving expanded polyglutamine tracts. Original research: Nature 575, 203–209 (2019).

In 1989, the NASA spacecraft Voyager 2 detected six moons of Neptune that are interior to the orbit of the planet’s largest moon, Triton. Showalter et al. report the discovery of a seventh inner moon, Hippocamp. Originally designated as S/2004 N 1 and Neptune XIV, this moon was found in images taken by NASA’s Hubble Space Telescope in 2004–05 and 2009, and then confirmed in further images captured in 2016. Hippocamp is only 34 kilometres wide, which makes it diminutive compared with its larger siblings, and it orbits Neptune (pictured) just inside the orbit of Proteus — the planet’s second-largest moon. The discovery of Hippocamp is intriguing because of the moon’s relationship to Proteus and the role that both objects might have had in the history of Neptune’s inner system. Original research: Nature 566, 350–353 (2019).

Materials known as superconductors transmit electrical energy with 100% efficiency. They have a wide range of applications, such as magnetic resonance imaging in hospitals. However, these applications have been hampered, largely by the fact that the superconducting state exists only at temperatures well below room temperature (295 kelvin). Drozdov et al. report several key results that confirm that, when compressed to pressures of more than one million times Earth’s atmospheric pressure, lanthanum hydride compounds, which are rich in hydrogen, become superconducting at 250 K. In the next few years, experiments will probably focus on searching for superconductivity in other pressurized hydrogen-rich materials. Given that only a small fraction of possible hydrogen-rich systems have been subjected to experiments at these tremendous pressures, it seems more likely than ever that the dream of room-temperature superconductivity might be realized in the near future. Original research: Nature 569, 528–531 (2019).

Tremendous progress has been made in developing gene-editing tools. But a seemingly fundamental limit to the efficiency and precision of gene editing had been reached, owing to the tools’ reliance on complex and competing cellular processes. Anzalone et al. now describe ‘search-and-replace’ genome editing, which enables the genome to be altered precisely. In their process, the ‘search’ part of an RNA guide directs a Cas9 protein to a specific sequence in a DNA target, where it cuts one of the two DNA strands. A reverse transcriptase enzyme then produces DNA complementary to the sequence in the ‘replace’ part of the guide, and installs it at one of the cut ends, where it takes the place of the original DNA sequence. DNA repair then produces a fully edited duplex. Imperfect edits are almost entirely avoided. Original research: Nature 576, 149–157 (2019).

Sediments beneath glaciers and ice sheets harbour carbon reserves that, under certain conditions, can be converted to methane, a potent greenhouse gas. Lamarche-Gagnon et al. present direct measurements of dissolved methane in water discharged from a land-terminating glacier of the Greenland Ice Sheet (pictured) during the summer. The water was supersaturated with methane, and the amount of methane released to the atmosphere rivals that from other terrestrial rivers. Subglacial sediments can therefore act as a local source of methane, corroborating the results of other studies. Lamarche-Gagnon et al. go further by demonstrating that the continuous flux of methane from the Greenland subglacial environment varies with the efficiency of subglacial meltwater drainage. The study provides an example of how our planet’s icy domains can interact with the surrounding Earth system in unexpected and potentially important ways. Original research: Nature 565, 73–77 (2019).

The DNA of eukaryotic organisms (such as animals, plants and fungi) is stored in two cellular compartments: in the nucleus and in organelles called mitochondria. A healthy individual’s mitochondrial DNA (mtDNA) molecules are mostly identical. However, in people with diseases caused by mtDNA mutations, normal and mutant mtDNA molecules typically coexist in a single cell — a situation termed heteroplasmy. Mitochondrial DNA was thought to derive exclusively from maternal egg cells, with no paternal contribution, but Luo et al. challenge this dogma, identifying three families with mtDNA heteroplasmy caused by biparental mitochondrial inheritance. Previous work has shown that mitophagy, the process by which cells ‘eat’ their own mitochondria, has a role in the selective elimination of paternal mitochondria. These rare instances of paternal mtDNA transmission might therefore be attributed to defective mitochondrial turnover. Original research: Proc. Natl Acad. Sci. USA 115, 13039–13044 (2018).

Young animals gallop across fields, climb trees and immediately find their feet with enviable grace after they fall. And like our primate cousins, humans can deploy opposable thumbs and fine motor skills to complete tasks such as effortlessly peeling a clementine or feeling for the correct key in a dark hallway. Although walking and grasping are easy for many living things, robots have been notoriously poor at gaited locomotion and manual dexterity. Even a robot that performs beautifully in simulation will stumble and fall after a few encounters with seemingly minor physical obstacles. Writing in Science Robotics, Hwangbo et al. report that a data-driven approach to designing robotic software can improve the locomotion skills of robots. They demonstrate their method using the ANYmal robot (pictured) — a medium-dog-sized quadrupedal system. Original research: Sci. Robot. 4, eaau9354 (2019).

A copper-catalysed reaction, known as the CuAAC reaction, is the poster child for click chemistry. A reaction is defined as click chemistry if it is (among other things) operationally simple, high-yielding, applicable to a broad range of compounds, yet exceptionally selective — the chemical groups that undergo the reaction must react only with each other. CuAAC reactions are used in many disciplines, but their applications would be even broader if structurally complex azide compounds (which contain N3 groups) were more widely available to use as reactants. Meng et al. report that fluorosulfuryl azide (FSO2N3) reacts with almost any primary amine (compounds that contain NH2 groups) to achieve a nearly 100% yield of the corresponding azide, and used their reagent to make a library of 1,224 azides. Their reaction meets the speed, breadth and efficiency criteria for click chemistry. Moreover, the prepared azide solutions can be used directly in CuAAC reactions. Original research: Nature 574, 86–89 (2019).

We asked readers to vote for a News & Views article to be included as part of our round-up of the year. This is the one they chose.

Détroit et al. report the remarkable discovery of a human relative that will no doubt ignite plenty of scientific debate. This newly identified species was found in the Philippines and named Homo luzonensis. Rapidly changing knowledge about hominin evolution in Asia is forcing the re-examination of ideas about early hominin dispersals from Africa to Eurasia. Homo luzonensis provides yet more evidence that hints that Homo erectus might not have been the only globe-trotting early hominin. The interesting mix of features observed in H. luzonensis raises questions about the species’ ancestry and its relationships with other human relatives. One thing can be said for certain — our picture of hominin evolution in Asia just got even messier, more complicated and a whole lot more interesting. Original research: Nature 568, 181–186 (2019).