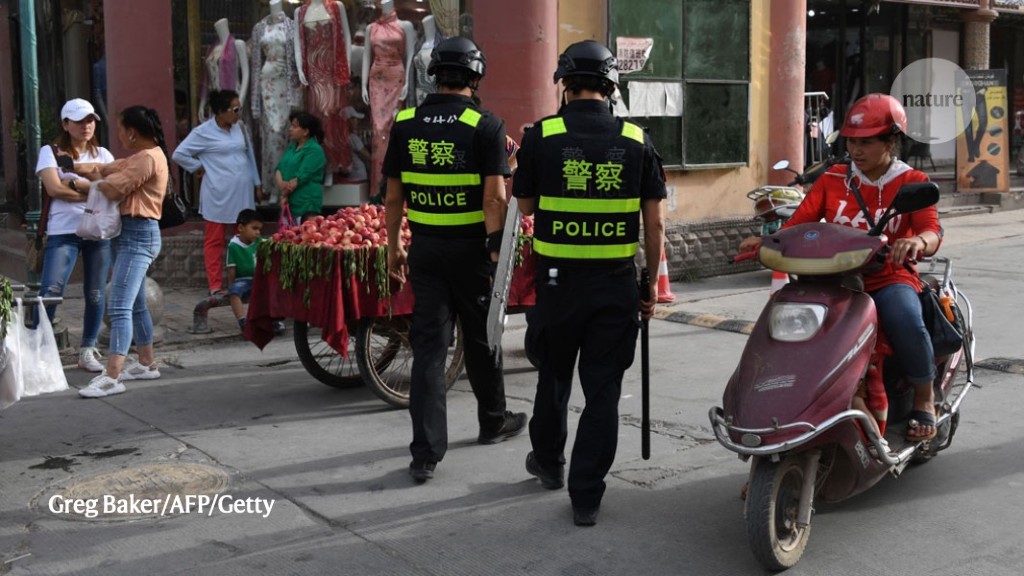 Two science publishers are reviewing the ethics of research papers in which scientists backed by China’s government used DNA or facial-recognition technology to study minority groups in the country, such as the predominantly Muslim Uyghur population.

Springer Nature (which publishes Nature) and Wiley want to check that the study participants gave informed consent, after researchers and journalists raised concerns that the papers were connected to China’s heavy surveillance operations in the northwestern province of Xinjiang. China has attracted widespread international condemnation — and US sanctions — for mass detentions and other human-rights violations in the province. The Chinese government says that it is conducting a re-education campaign in the region to quell what it calls a terrorist movement.

“We are very concerned about research which involves consent from vulnerable populations,” says a spokesperson from Springer Nature (Nature’s news team is editorially independent of its publisher).

The publishers’ announcements, which The New York Times reported on 4 December, follow rising concerns about the publication of such work.

Scientists say there are scores of such research papers in the literature. Earlier this week, Yves Moreau, a computational biologist at the Catholic University of Leuven in Belgium, wrote an opinion article in Nature warning of the dangers that accompany the proliferation of DNA profiling and calling for all unethical work in biometric research to be retracted to avoid giving its authors academic credence.

Springer Nature said that this week it would add notes of concern about consent to two papers1,2 that reported studies using DNA from hundreds of Uyghurs to predict height or facial shape. One of the papers, published in Human Genetics1, was highlighted in a separate New York Times article, also published earlier this week, that described worries that the participants hadn’t given informed consent.

Both papers state that volunteers gave consent, and that the studies were approved by an ethics committee from the Institute of Forensic Science which is affiliated with China’s police and security authority.

“We are ordinary forensic scientists who carry out forensic research following the scientific research ethics norms,” said Caixia Li of the Institute of Forensic Science in Beijing, a co-author on both papers1,2, in an e-mail to Nature’s news team. He noted that the “study” was approved by his institute, and said that “all individuals provided written informed consent”.

Moreau says that it’s hard to see how Uyghur peoples could give free, informed consent to DNA or facial-recognition work — given that so many people in that ethnic group have been sent to internment camps (which China calls education facilities). “It is my opinion that no population-genetics research on Chinese populations can be considered ethical, because the risk of abuse is so pervasive.”

Springer Nature has identified a number of other ‘papers of concern’ published by its journals, the spokesperson adds, which are being investigated. And it has updated its guidance to editors and authors about the need to gain explicit and informed consent in studies that involve clinical, biomedical or biometric data from people. “All instances of non-compliance with our policies will result in appropriate editorial action, which may include retraction,” the spokesperson said.

Moreau says: “Expression of concerns are a welcome first step, but this is only meaningful if it is the start of a large-scale ethical review of all forensic population-genetic research on Chinese populations and of all biometric research.”

Wiley, meanwhile, said it was opening a formal investigation into a 2018 article that described analysing a database of photos of Uyghur, Tibetan and Korean groups using various facial-recognition algorithms3. In September, four researchers, including Moreau, who were led by the advocacy group Tech Inquiry in Toronto, Canada, had asked Wiley to retract the paper because of the potential for abuse of facial-recognition technology, and the “racial overtones of the authors’ language”. One of the paper’s co-authors is affiliated with Curtin University in Perth, Australia, which this month also requested that Wiley review the paper.

Jack Poulson, an applied mathematician and former Google employee who is the founder of Tech Inquiry, says Curtin deserves public credit for its response. “If it’s clear that there’s any chance that a paper might contribute to human-rights violations, I think it’s fair to call for a retraction,” he says.

“We conducted an initial review of the paper in question and found the journal did follow existing guidelines,” a spokesperson for Wiley said, but confirmed that the publisher was now re-evaluating the paper.

In its September letter, Tech Inquiry noted that, according to guidelines laid down by the Committee on Publication Ethics, a London-based publisher-advisory body, papers can be rejected on ethical grounds even if they come with approvals from an ethics committee (as the Wiley paper did). The guidelines also say that journals should take special care when the research is conducted on “vulnerable groups”, which Springer Nature has emphasized in its latest editorial policies. Nature’s news team asked the paper’s authors for comment, but they have not replied.

There are numerous examples of papers that report the use of biometric technology to study Uyghur and other minority ethnic groups in China. Moreau wrote in his opinion article that he had identified 40 articles co-authored by members of the Chinese police in 3 leading forensic-genetics journals — published by Springer Nature and by Elsevier — that describe the DNA profiling of Tibetans and Muslim minorities. And of a wider sample of more than 500 forensic population-genetics studies in Chinese populations, he wrote, half had co-authors from China’s police force, military or judiciary.

A spokesperson for Elsevier said that the company is in the process of producing more comprehensive guidelines for the publication of genetic data, but that it was “unable to control the potential misuse of population data articles” by third parties after publication.

Journalists have previously raised concerns about numerous conference papers that describe studying Uyghur groups, including manuscripts from a biometrics conference held in Xinjiang in 2018 that Springer Nature published as a book4.

The Institute of Electrical and Electronics Engineers (IEEE) has also published conference proceedings describing facial-recognition analyses of Uyghur populations (see, for example, refs 5,6). Asked by Nature’s news team whether the IEEE, too, was reviewing the issues, the IEEE’s president and chief executive José Moura wrote: “IEEE recognizes the importance of protecting individuals who are involved in human subject research and the role of the Institutional Review Boards in that effort. IEEE is committed to reviewing our policies to ensure more consistent application of this process across the full range of IEEE publications.”