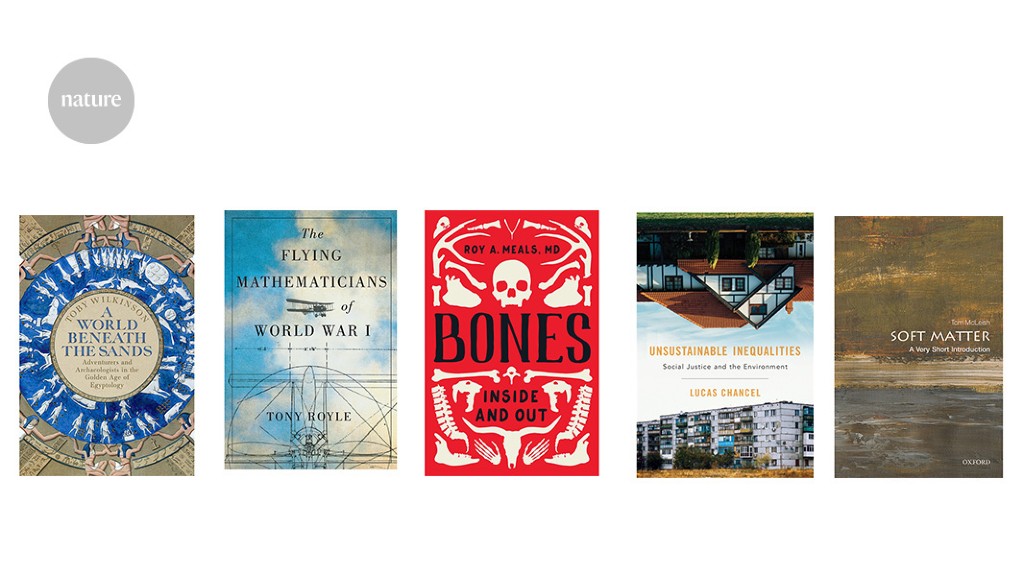 Freeze a rose in liquid nitrogen then tap it with a hammer, and the petals shatter. “Its softness is a function of its temperature, not just its molecular constituents and structure,” observes theoretical physicist Tom McLeish, one of the researchers who founded ‘soft-matter physics’ in the 1990s. The field covers milkiness, sliminess and pearliness in colloids, polymers, liquid crystals, membranes, foams, granular materials, glasses and gels, and draws on chemistry and biology. This short introduction is fascinating, if unusually challenging.

Bone is a marvel: light-weight, durable, responsive to changing conditions and self-repairing. But “hardly anybody has ever seen or wants to see living bone, especially their own”, writes orthopaedic surgeon Roy Meals in his revealing, sometimes riveting and finely illustrated investigation, ranging from the dinosaurs to today. Hence, perhaps, the confusion over how many bones humans have: although 206 is the widely accepted figure, it actually varies from person to person. Even the number of ribs can differ, from 24 to 26.

When the United States announced its withdrawal from the 2015 Paris climate agreement, its president claimed to be protecting US miners’ jobs. How, asks Paris-based economist Lucas Chancel, can the environment be protected while fighting poverty and inequality? His brief and moderately hopeful global analysis mentions Sweden, where poor households get assistance to replace obsolete heating equipment, and Indonesia, which swapped large fossil-fuel subsidies for “a vast program of social protection aimed at reducing inequalities”.

The Flying Mathematicians of World War I

The First World War was crucial to the development of UK aeronautics. Who better to tell the story than an ex-Royal Air Force pilot who is a trained mathematician, a dedicated historian and a lively writer: Tony Royle. His compelling book is inspired by academics who became pilots, such as physicist Frederick Lindemann — later scientific adviser to Winston Churchill — who experimented with putting an aircraft into a deliberate spin, calculating the effects and then stabilizing it. Lindemann’s courage launched a standard spin-recovery procedure.

A World Beneath the Sands

Two anniversaries approach: of the deciphering of Egyptian hieroglyphs in 1822 and the discovery of Tutankhamun’s tomb in 1922. Egyptologist Toby Wilkinson’s book addresses the intervening century, when Western archaeologists and imperialists scrambled to excavate ancient Egypt’s civilization and procure treasures for collections abroad. He tells the story well, with attention to both scholarship and scandal. After 1922, he says, “in embracing scientific rigour, Egyptology would lose its panache”.