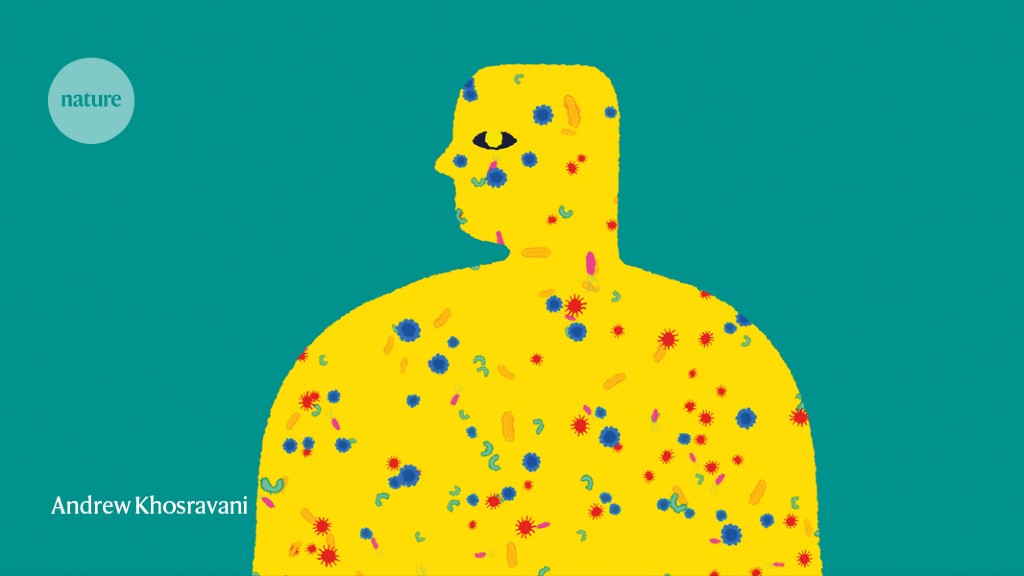 In contrast to the gut, which offers a near-ideal habitat for the growth of fermentative bacteria, the skin is an inhospitable expanse. Much of the epidermal layer that protects humans from the elements is dry, salty, acidic and nutrient-poor. The exceptions are the oases around lipid-rich hair follicles.

Despite this adversity, a diverse and physiologically important array of bacteria, viruses, fungi and archaea make their home on the skin. Typically, a person has around 1,000 species of bacteria on their skin. And, as might be expected from such a large area — roughly two square metres for an average adult — the skin offers a variety of distinct ecosystems, which create conditions that favour different subsets of organisms. 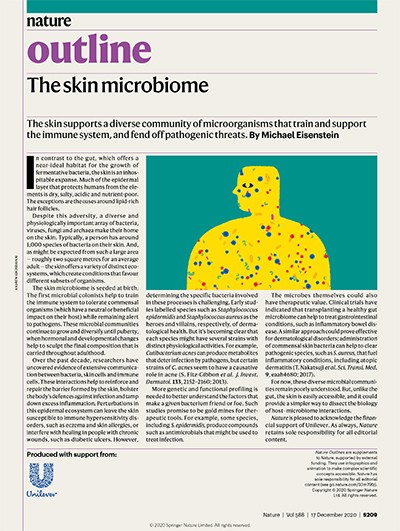 The skin microbiome is seeded at birth. The first microbial colonists help to train the immune system to tolerate commensal organisms (which have a neutral or beneficial impact on their host) while remaining alert to pathogens. These microbial communities continue to grow and diversify until puberty, when hormonal and developmental changes help to sculpt the final composition that is carried throughout adulthood.

Over the past decade, researchers have uncovered evidence of extensive communication between bacteria, skin cells and immune cells. These interactions help to reinforce and repair the barrier formed by the skin, bolster the body’s defences against infection and tamp down excess inflammation. Perturbations in this epidermal ecosystem can leave the skin susceptible to immune hypersensitivity disorders, such as eczema and skin allergies, or interfere with healing in people with chronic wounds, such as diabetic ulcers. However, determining the specific bacteria involved in these processes is challenging. Early studies labelled species such as Staphylococcus epidermidis and Staphylococcus aureus as the heroes and villains, respectively, of dermatological health. But it’s becoming clear that each species might have several strains with distinct physiological activities. For example, Cutibacterium acnes can produce metabolites that deter infection by pathogens, but certain strains of C. acnes seem to have a causative role in acne (S. Fitz-Gibbon et al. J. Invest. Dermatol. 133, 2152–2160; 2013).

More genetic and functional profiling is needed to better understand the factors that make a given bacterium friend or foe. Such studies promise to be gold mines for therapeutic tools. For example, some species, including S. epidermidis, produce compounds such as antimicrobials that might be used to treat infection.

The microbes themselves could also have therapeutic value. Clinical trials have indicated that transplanting a healthy gut microbiome can help to treat gastrointestinal conditions, such as inflammatory bowel disease. A similar approach could prove effective for dermatological disorders; administration of commensal skin bacteria can help to clear pathogenic species, such as S. aureus, that fuel inflammatory conditions, including atopic dermatitis (T. Nakatsuji et al. Sci. Transl. Med. 9, eaah4680; 2017).

For now, these diverse microbial communities remain poorly understood. But, unlike the gut, the skin is easily accessible, and it could provide a simpler way to dissect the biology of host–microbiome interactions.

Nature is pleased to acknowledge the financial support of Unilever. As always, Nature retains sole responsibility for all editorial content.