A huge winter storm passed through the region of the Mid Atlantic as it proceeded to the Northeast, which brought freezing rain, heavy snowfall, and hazardous roads.

The storm is among the biggest in East Coast cities since the crippling blizzard in 2016 It resulted in pileups of dozens of vehicles in Clinton, Pa., with two dead. New York had a multi-car collision near a bridge that links the Bronx to Manhattan, injuring six people.

According to the NWS weather service, by midnight at Central Park, there were already 6.5 inches of snow plus sleet. NWS meteorologist David Stark says that the snow could shift to sleet earlier than anticipated; snow accumulation might be in the lower range of the predicted eight to 12 inches.

Temperatures at the mid-20’s levels, together with sharp wind gusts, made walking even short distances difficult.

There were five inches of snow at the Rittenhouse Square in Philadelphia and nearly six inches at the Philadelphia International Airport.

The storm is a nor’easter, hitting Maryland, Washington, and Virginia, with snow and freezing precipitation. The NWS says it may stretch almost 1,000 miles starting from North Carolina up to New England.

Effects of the storm and snow 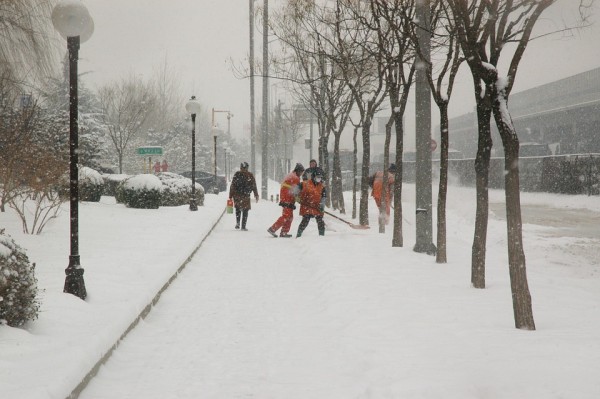 (Photo : Pixabay)
A huge winter storm passed through the region of the Mid Atlantic as it proceeded to the Northeast, which brought freezing rain, heavy snowfall, and hazardous roads.

People may expect that the storm may topple trees, take out power lines, and make roadways icy. The brunt may be in south-central Pennsylvania and western Maryland, where two feet of snow may occur.

Advocates for the homeless want more hotel rooms opened. Guidelines of Code Blue dictate that efforts are increased to persuade the homeless to go to the shelter when night temperatures are lower than freezing.

Not all homeless, however, want the charity because they fear being robbed or getting the coronavirus. Hotel rooms have been rented by the city to shelter over 600 homeless.

Meanwhile, many flights and rail services have been canceled. Restrictions on some busy roads were also implemented. According to transportation secretary Elaine Chao, everyone should check travel and transportation conditions with local officials.

Amtrak will modify its schedule in some Northeastern areas. It will also cancel some of its services starting Wednesday up to Friday; these also include Acela services on Thursday. New Jersey Transit is also suspending its northern New Jersey and New York bus as well as its system-wide rail services.

Metropolitan Transportation Authority’s New York subway, commuter rails, and buses may open after 5 AM on Thursday.

READ ALSO: National Weather Service: Get Weather Safety Gifts for Loved One this Christmas Plus Other Weather Tips

Because the snowstorm will bear down on the city, Bill de Blasio, mayor of New York City, canceled classes in-person in public schools on Thursday. Online classes should continue, however. Approximately 190,000 students of New York’s public schools resumed physical classes this month.

Other school districts in the country are shifting to remote, online learning mainly prompted by the coronavirus pandemic and disruption of schedules.

School officials in several areas are already trying to decrease cancellations of classes due to the weather. According to education experts, students need to be in class this year.

However, Mahwah, New Jersey school officials believe that the snow days should give a chance for students to just be kids and enjoy the snow, or bake cookies, read books or watch a good movie. For them, the snowfall and winter storm in the Mid Atlantic and Northeast will be the perfect opportunity for that.