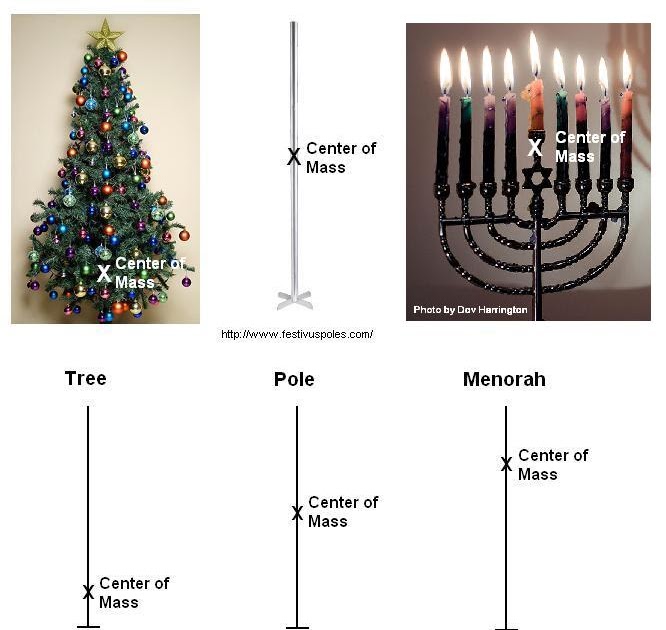 Physics
Share on Facebook
Share on Twitter
Share on Pinterest
Share on LinkedIn
Share on Facebook
Share on Twitter
Share on Pinterest
Share on LinkedIn
It’s a typical December scenario: The family trip to the tree lot. The Fraser Fir tied to the roof of the car. Dad under the branches screwing the stand to the trunk. And the inevitable wobbling of the 7-foot holiday embellishment as it threatens to topple over and onto the floor, scattering needles everywhere. When it comes to holiday decorations, why do we work so hard to put out fragile items easily destroyed by Fifi and Fido? (Not to mention Frank and Francine…) Holiday decorations are unstable. (We’re talking about physics here. We’ll leave their emotions aside.) To take a closer look at what we’re dealing with, I’ve considered three of the most popular items from the array of December decor: The Christmas tree, the Hanukkah menorah and, of course, the Festivus pole. Which of the three is the most likely to topple over when cousin Fred bumps into it after sampling too much egg nog? 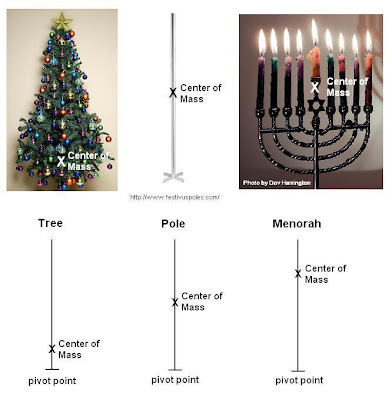 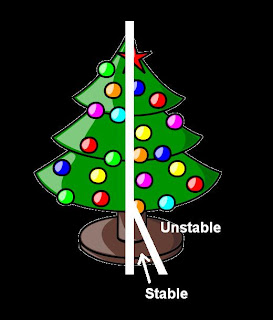 On a Christmas tree, the majority of the mass is concentrated near the floor. It has a low center of mass. The aluminum Festivus pole’s mass is evenly distributed, putting its center of mass right near the center of the pole. For a menorah, with its branches at the top, it’s center of mass is higher. That means the menorah would be the most likely to topple.
Just as we know it’s hard to push a door open by pushing near the hinges versus near the handle, it’s hard to topple an object whose center of mass is low to the ground. (For a longer discussion on this, check out this year’s Thanksgiving post.) Why, then, do those pesky trees make life so difficult for us? The reason Christmas trees topple so easily is because their base is so small. Anything making small contact with the ground relative to its size is going to be fairly unstable. It only has to be pushed past its edge of contact with the ground before it starts to tip over. (Trees have roots to prevent this problem in the wild.) But what if I wanted to juggle them? The menorah would be my best choice. “Why?” do you ask. When trying to balance something like a baseball bat or a broom i 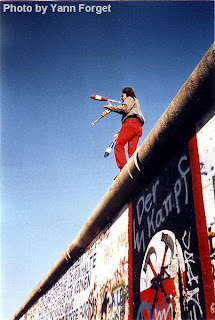 n the palm of your hand, it’s easier when the mass is concentrated at the top. Don’t believe me? Try sticking a wad of Play-Doh at one end of a pencil. Now, try to balance the upright pencil on the tip of your finger. Is it easier when the Play-Doh is up in the air or when it’s touching your finger? It’s easier when it’s up in the air. Here’s why: When the mass is concentrated further away from the pivot point – or point of rotation – it takes more force and more time for it to move. Think of an ice skater spinning. When her arms are stretched out, she spins more slowly than when they are tucked close to her chest. Likewise, an object will tip over more slowly when it’s center of mass is further away from the pivot point. If you’re holding an object in your hand, a slower tipping time gives you more time to control the object and keep it from falling. That means the menorah, with the higher center of mass, will be easiest to control and easiest to juggle. Ta dum! Happy holidays and safe juggling!
What happens when several thousand distinguished physicists, researchers, and students descend on the nation’s gambling capital for a conference? The answer is “a bad week for the casino”—but you’d never guess why.
Lexie and Xavier, from Orlando, FL want to know: “What’s going on in this video ? Our science teacher claims that the pain comes from a small electrical shock, but we believe that this is due to the absorption of light. Please help us resolve this dispute!”
Even though it’s been a warm couple of months already, it’s officially summer. A delicious, science-filled way to beat the heat? Making homemade ice cream. (We’ve since updated this article to include the science behind vegan ice cream. To learn more about ice cream science, check out The Science of Ice Cream, Redux ) Image Credit: St0rmz via Flickr Over at Physics@Home there’s an easy recipe for homemade ice cream. But what kind of milk should you use to make ice cream? And do you really need to chill the ice cream base before making it? Why do ice cream recipes always call for salt on ice?
This article was originally published by Google.com. Read the original article here.
Share on Facebook
Share on Twitter
Share on Pinterest
Share on LinkedIn

Our Perseverance Rover Takes up Residence on Mars on This Week @NASA – February 20, 2021
Can Christmas Tree Lights Spark a Fire? | MythBusters
How It’s Made: Woven Cashmere Fabric
From The Mill To Your Glass, Here’s How Apple Cider Is Made
Feb. 18: Our Perseverance Rover & Ingenuity Helicopter Arrive at Mars