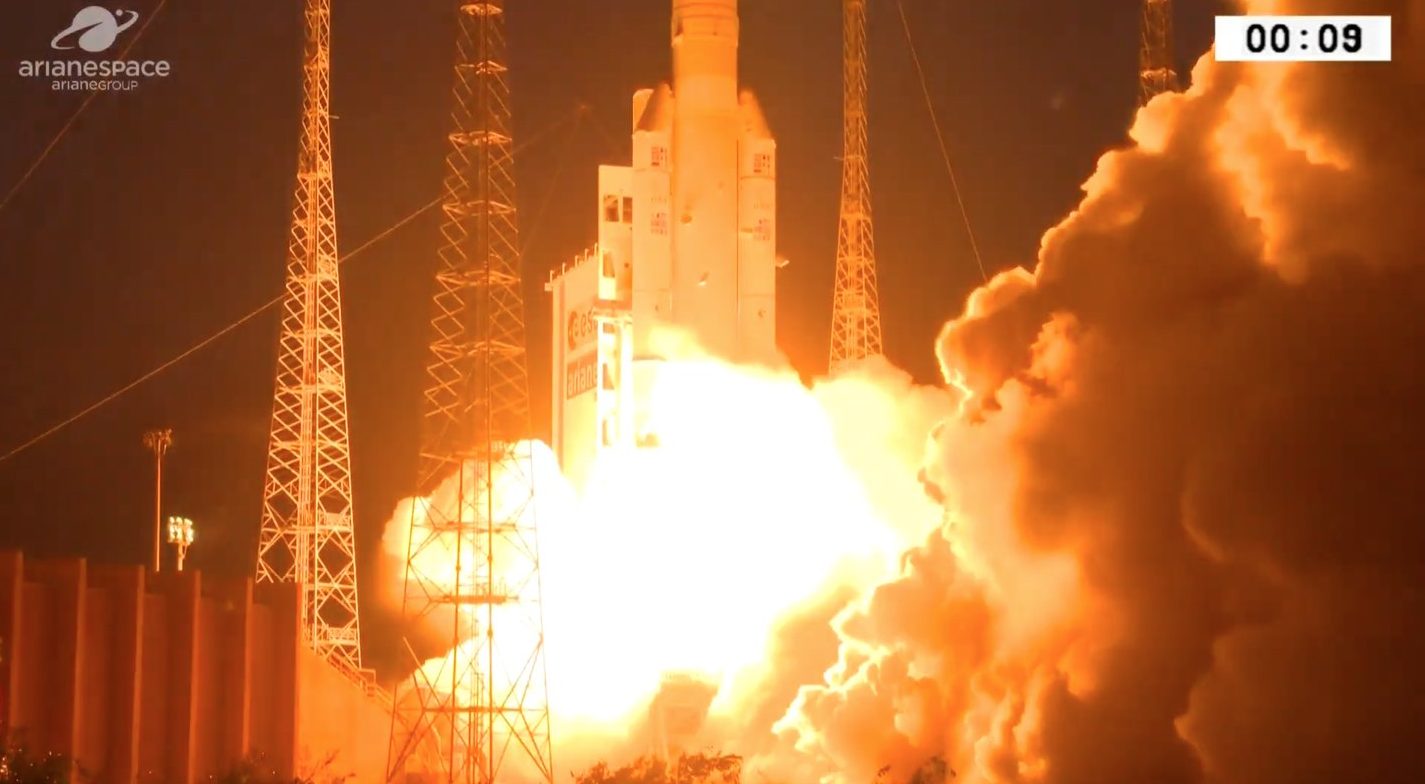 WASHINGTON — An Ariane 5 rocket from European launch provider Arianespace successfully lifted off Nov. 26, carrying a communications satellite for the Egyptian government and a satellite for Inmarsat.

The launch was the 250th of an Ariane-family rocket, and one of the last for the Ariane 5, which has 11 missions remaining. Europe is phasing out the Ariane 5, its heavy-lift vehicle, from 2020 to 2023 in favor of the lower cost Ariane 6, which is now in production.

François Gaullier, Airbus Defence and Space senior vice president of telecommunications satellite systems, said in a post-launch speech that the company has received telemetry from the satellite, indicating it is healthy in orbit.

TIBA-1 is designed to provide connectivity across Egypt and other countries along the Nile river.

Egypt’s Ministry of Communications and Information Technology said TIBA-1 is the first in a series of “TIBA Sat” missions the country plans in the near future.

Egypt aims to “disrupt the communications industry in Egypt and Africa” with the TIBA Sat satellites, foreshadowing a new entrant into a market where Middle East operators Spacecom, Yahsat, Es’hailSat and Arabsat are all present, along with global satellite operators.

Egypt also has a commercial satellite operator, NileSat, which provides service from three satellites, according to the company website. Arianespace said in a news release it has launched three satellites for NileSat between 1998 and 2010.

Pearce described GX-5 as the beginning of a “second phase of network evolution” for Global Xpress. He said Inmarsat plans to operate the Ka-band satellite over Europe and the Middle East to provide Wi-Fi for airplanes and boats.

GX-5 has 72 fixed spot beams, plus four beams that can be steered to cover different parts of the globe. Mark Dickinson, Inmarsat deputy chief technology officer, said in a post-launch speech that the company received telemetry from the 4,000-kilogram satellite.

Inmarsat is now focused on layering additional capacity on Global Xpress to support customers in high-traffic areas. The company’s next satellite, Inmarsat-6 F1, is scheduled to launch in 2020 on a Mitsubishi Heavy Industries H-2A rocket, followed by Inmarsat-6 F2 on a to-be-announced launcher in 2021. Both are from Airbus.

After those, Inmarsat has two payloads launching in 2022 on Space Norway satellites that Northrop Grumman is building. Three reprogrammable satellites, the Inmarsat-7s, follow from Airbus, with launch anticipated by 2023.

Arianespace’s VA250 mission was the fourth and final launch of Ariane 5 for the year. Stéphane Israël, Arianespace chief executive, said the company’s next mission will be a Soyuz launch with the Italian Cosmo-SkyMed second-generation radar satellite, the European Space Agency’s CHEOPS telescope, and three smallsat secondary payloads. That mission is scheduled for Dec. 17, he said.

China to Share Moon Samples Brought to Earth by Chang’e 5 Probe With Other Countries
Amazon closes New Jersey warehouse after workers test positive for coronavirus
Why that ad for butt-flap pajamas is following you all over the internet
Game on: New study shows which sports teams have the greenest fans
Presentations from Luminate to make your start-up succeed – Physics World