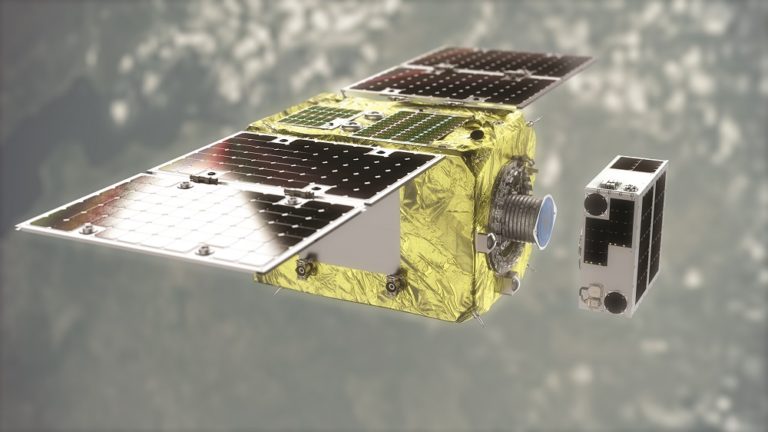 Through the mission, Tokyo-based Astroscale plans to demonstrate core technologies necessary for space debris capture and removal, a first step in establishing itself as a provider of on-orbit services.

“We now have the launch in our sights,” Seita Iizuka, ELSA-d project manager, said in a statement. “Publicly announcing this significant milestone is possible thanks to years of teamwork. The ELSA-d program demonstrates complex and innovative capabilities that will support satellite operators in realizing options for their post-mission disposal strategies and establish Astroscale as a global leader in the on-orbit servicing market.”

The population of object in low Earth orbit is increasing rapidly thanks to many factors including decreasing launch costs and the emergence of large commercial satellite constellations. Astroscale plans to help address the problem by removing defunct satellites and rocket bodies from orbit.

“We’re on the brink of a new chapter in on-orbit servicing, and Astroscale is eager to take this important next step in demonstrating technical innovation, advancing the discussion on international policies and proving the business case,” Nobu Okada, Astroscale founder and CEO, said in a statement.

For the ELSA-d mission, Astroscale plans to launch two satellites, a servicer spacecraft with a mass of about 175 kilograms and a 17-kilogram client satellite. In orbit, the servicer equipped with proximity rendezvous technologies and a magnetic capture mechanism is designed to repeatedly dock with and release the client, which is equipped with a ferromagnetic plate.

“Astroscale intends to prove the capabilities required for debris removal, including client search, inspection and rendezvous, and both non-tumbling and tumbling docking,” according to the news release.

“Astroscale UK is proud to be operating this exciting mission,” John Auburn, managing director of Astroscale’s UK office, said in a statement. “ELSA-d will be groundbreaking in so many ways — it will demonstrate the first semi-autonomous capture of a non-responsive, tumbling client, as well as the first identification of a client located outside the servicer’s sensor field of view.”

While the ELSA-d mission is based on technologies for orbital debris removal, Astroscale’s vision includes various types of on-orbit services.

Astroscale is preparing to complete the first phase of the Japan Aerospace Exploration Agency’s Commercial Removal of Debris Demonstration project and the company is preparing to introduce its first satellite life-extension platform in geostationary orbit.

Single molecules keep to the straight and narrow – Physics World
GitHub is forcing Microsoft to deal with thorny controversies two years after acquisition
Barclays predicts some stocks like BP could rally more than 50% next year
Outlook: Allergies
Want to Build a Nanobot? This New Shrinking Technique Could Help