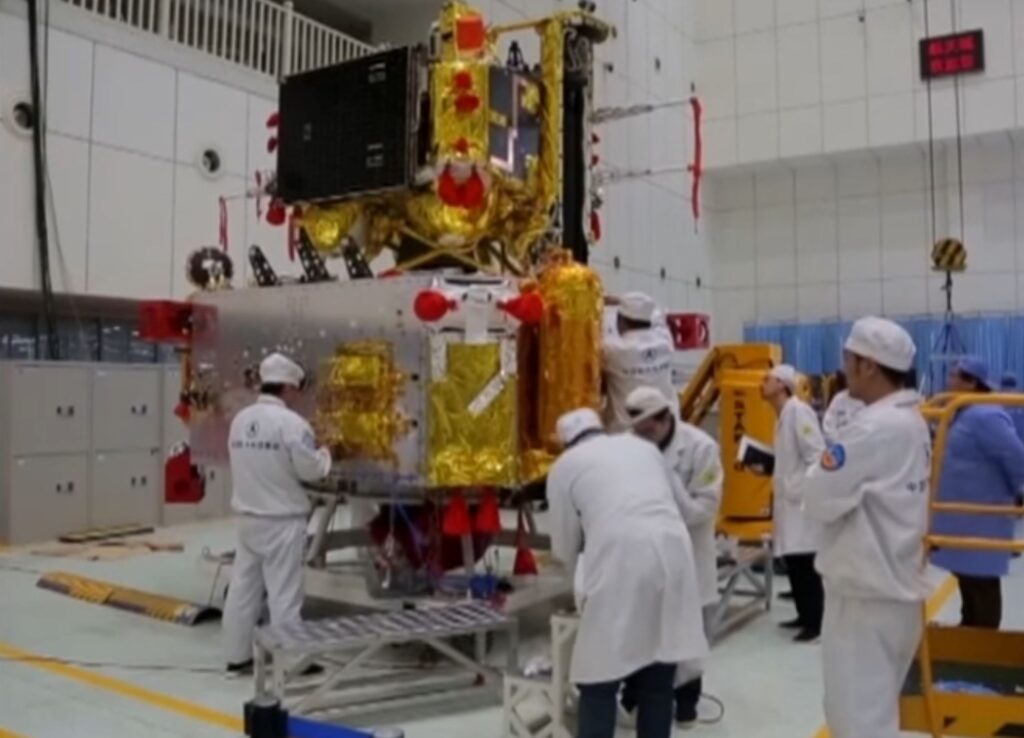 The ambitious mission is now scheduled to launch atop the fifth Long March 5 heavy-lift rocket. The mission will launch from the Wenchang Satellite Launch Center situated on Hainan island.

Chang’e-5 will attempt to collect and return around two kilograms of lunar samples from a site close to Mons Rümker, a volcanic formation situated in the Oceanus Procellarum region of western edge of the near side of the moon.

The mission will involve the first robotic lunar orbit rendezvous. After the lander collects samples, an ascent vehicle will liftoff and dock with an orbiter module above the moon. A return capsule will then perform a ‘skip reentry’ following separation from the orbiter close to Earth. The return capsule will deliver the samples to the same site as where the country’s Shenzhou crewed missions land.

The complexity of the mission is considered by observers to be related future crewed lunar landing ambitions. The last lunar sample return, the Soviet Union’s 1976 Luna 24 mission, utilised a much simpler direct return approach.

Wu Weiren, chief designer of China’s lunar exploration program, told state media the mission would fly in 2020 at the first China Space Science Assembly last month. No precise time was stated, but other priorities and missions indicate a launch late in the year.

Ahead of Chang’e-5 China will carry out a test flight of the Long March 5B as a precursor to beginning the construction of a space station, in the first half of 2020. Following this, the fourth Long March 5 will launch China’s first independent interplanetary mission—to Mars—in July or August.

This new schedule is dependent on a successful return-to-flight of the Long March 5, expected in mid-to-late December. Components of the launcher were delivered to Wenchang late last month for assembly and testing ahead of launch.

The Wenchang launch complex was established to facilitate launches of China’s new generation of liquid propellant launch vehicles. The components of the Long March 5 are delivered to Hainan by sea by Yuanwang cargo ships. The country’s rail system, which transports older Long March rockets, cannot transport the 5-meter-diameter core.

The previous Long March 5 launch failed in July 2017, delaying Chang’e-5, which was originally scheduled for launch late that year.

That mission saw a turbopump on one of two YF-77 cryogenic first-stage engines fail, seeing the payload fail to achieve orbit. Redesigning the engine has resulted in a gap of nearly 900 days between the failure and expected return-to-flight.

The failure also postponed the planned construction of a modular low Earth orbit space station. The 20-metric-ton modules will be launched by the Long March 5B variant, which uses the same first stage.

China has a further sample return mission planned. Chang’e-6 is designed as a backup, but will be repurposed for a south polar landing if Chang’e-5 succeeds. The mission also has a small allocation for international science payloads, including involvement from France.

China has stated it will then proceed into an extended phase of lunar exploration involving Chang’e-7 and further lunar landing missions. The aim will be to establish a robotic “research base” in the mid-to-late 2020s as a precursor to crewed landings.

This set of 3-4 missions will carry out lunar resource in-situ utilization tests, “bio-scientific experiments,” and test rare-gas extraction and 3D-printing.

The ongoing Chang’e-4 lunar far side lander and rover mission will complete its 11th lunar day of activities Nov. 3. The mission’s Yutu-2 rover has so far traveled 289 meters across Von Kármán crater. It has detected evidence of material originating within the lunar mantle during its exploration.