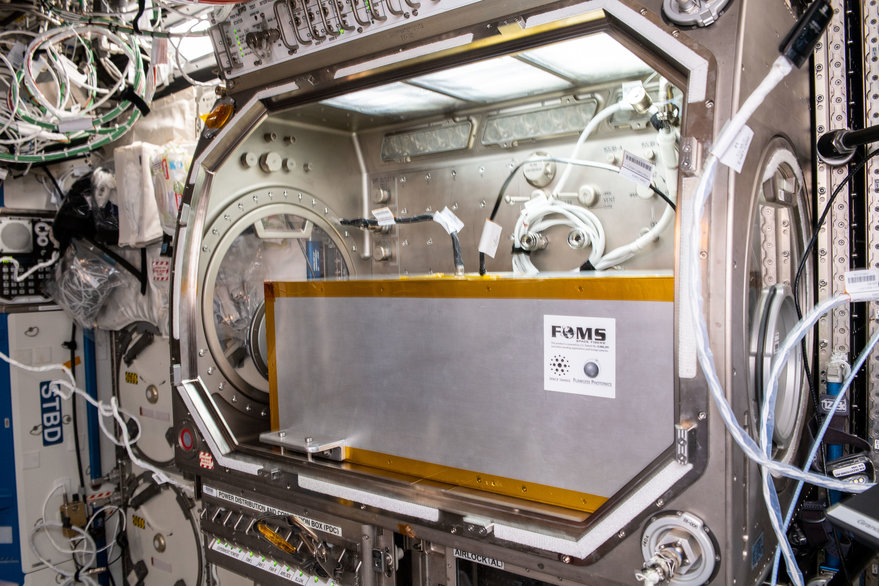 FOMS “successfully completed the calibration of the manufacturing hardware and demonstrated the first optical fiber manufacturing on orbit,” FOMS Principal Investigator Dmitry Starodubov announced at the 6th Workshop on Specialty Optical Fiber and Their Applications in Charleston, South Carolina. “The microgravity fiber demonstrated better uniformity than the fiber produced on the ground. This unique achievement is providing the basis for government and commercial utilization of our revolutionary space manufacturing platform.”

Entrepreneurs and investors have long pointed to optical fiber production as a killer app for in-orbit manufacturing, but it is challenging to produce. In addition to San Diego-based FOMS, Made In Space of Mountain View, California, and Physical Optics Corporation of Torrance, California, are working to produce high quality ZBLAN optical fiber on the space station with the support of the ISS National Laboratory, formerly known as the Center for the Advancement of Science in Space.

The experiment was returned by a SpaceX Dragon in June. NASA accepted delivery of the first optical fiber produced on orbit by FOMS on August 26.

Silica-based optical fibers “are the backbone of our current multi-trillion-dollar global telecommunications system,” Lynn Harper, who leads Integrative Studies for NASA’s Emerging Commercial Space Office and for the NASA Ames Space Portal, said by email. “The less loss of signal, the more accurate the information and the farther you can send the signal without using a repeater or other connector.”

Still, more work needs to be done to prove that high-quality ZBLAN or other optical fibers can be produced consistently in orbit. If a company“can prove superior quality multiple times, it would provide confidence that the company had sufficient understanding of the art and control of the end-to-end manufacturing process to take it to larger scale production or unique formulations not possible on Earth,” Harper added.

FOMS first reported successful production of ZBLAN in orbit Aug. 1 at the ISS Research and Development conference in Atlanta, where the company received an award for its work.