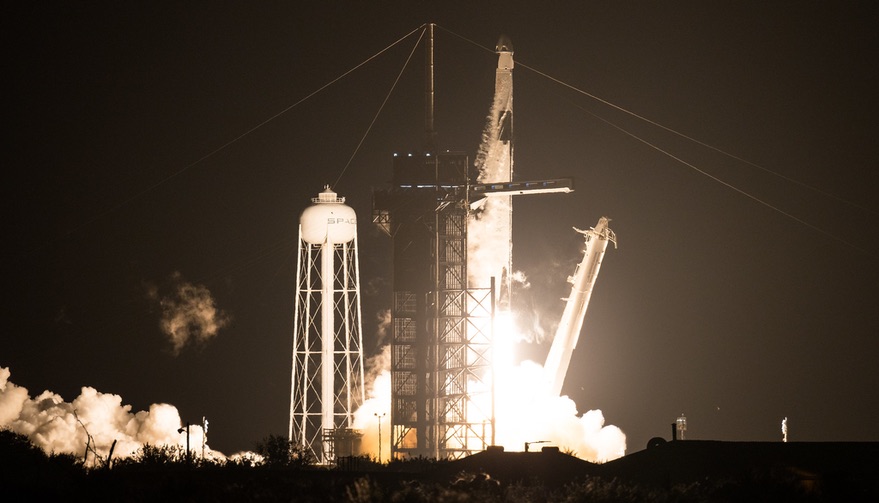 WASHINGTON — A SpaceX Crew Dragon spacecraft carrying four American and Japanese astronauts is on its way to the International Space Station after a successful Falcon 9 launch Nov. 15.

The spacecraft is scheduled to dock with the ISS at approximately 11 p.m. Eastern Nov. 16. The crew of NASA astronauts Mike Hopkins, Vic Glover and Shannon Walker, and JAXA astronaut Soichi Noguchi, will stay on the station for six months.

The launch was scheduled for Nov. 14 but delayed a day because of weather that delayed the arrival of the droneship to the landing zone in the Atlantic. It was not affected by an apparent case of COVID-19 by SpaceX Chief Executive Elon Musk, who reported mixed testing results and symptoms consistent with a mild case. Musk was not in close contact with the crew, and was notably absent from pre-launch activities at KSC, with company president Gwynne Shotwell present instead.

The Crew-1 mission sets a number of firsts. Glover will be the first Black astronaut to perform a long-duration flight on the ISS. Noguchi is the first Japanese astronauts to fly to orbit on three different vehicles: the shuttle, Soyuz and Crew Dragon. The mission is the first crewed orbital flight licensed commercially by the Federal Aviation Administration.

The mission is also the first operational commercial crew flight, after the successful completion of the Demo-2 test flight this summer with NASA astronauts Bob Behnken and Doug Hurley on board. NASA signed the paperwork formally certifying the spacecraft at the end of a flight readiness review Nov. 10.

“It’s just a tremendous day that is a culmination of a ton of work,” Kathy Lueders, NASA associate administrator for human exploration and operations, said at a Nov. 10 briefing after the review. “It’s NASA saying to SpaceX you have shown us you can deliver a crew transportation capability that meets our requirements.”

The certification also formally closed out SpaceX’s commercial crew contract with NASA to develop and demonstrate the Crew Dragon spacecraft. “With this milestone, NASA has concluded that the SpaceX system has successfully met our design, safety and performance requirements,” said Phil McAlister, director of commercial spaceflight development at NASA Headquarters, during a Nov. 12 call with reporters. “It marks the end of the development phase of the system.”

Crew-1 is the first of a series of what are formally known as “post-certification missions” by NASA. Crew-2, which will fly astronauts from NASA, JAXA and the European Space Agency, has a launch readiness date of March 30, 2021, agency officials said at the Nov. 10 briefing. Crew-3 would follow in late summer or early fall.

NASA has called these “operational” missions on many occasions because they are intended primarily for crew transportation to and from the ISS, rather than testing of the spacecraft itself. “We’re launching what we call an operational flight to the International Space Station,” NASA Administrator Jim Bridenstine said during a media event at KSC Nov. 13.

However, agency officials acknowledge that the vehicle is still new, with more to learn. “I would not characterize it as ‘operational’ at this point. There a little bit of a debate as to when we will achieve that designation,” McAlister said. “We’ve completed the development phase, and we are transitioning into operations.”

But, he added, “We don’t want to ever just victory and say we’re done learning and get complacent.” He emphasized the need to “stay vigilant” during these missions, even though the certification confirms that the vehicle meets the NASA requirements.

There will inevitably be problems, McAlister said. “I fully expect there to be issues and anomalies on future missions. No mode of human transportation is risk-free: even bicycles malfunction from time to time,” he said.

The present and future of space stations

The four Crew-1 astronauts will join NASA astronaut Kate Rubins and Roscosmos cosmonauts Sergey Ryzhikov and Sergey Kud-Sverchkov, who arrived at the station last month on a Soyuz spacecraft. That will bring the station’s crew to seven for the first time on a long-duration basis, something NASA has emphasized as a means of increasing the station’s scientific output.

“We’re looking forward to having the extra capability on board, which will allow us to increase the science we do, increase the exploration development we do,” said Joel Montalbano, NASA ISS program manager, at a Nov. 13 briefing.

“It’s going to be exciting to see how much work we’re going to be able to get done while we’re there,” said Hopkins, commander of Crew-1, during a Nov. 9 media event. He said the crew had seen the plan for their first week of activities on the station after their arrival, which had little unscheduled time. “I think they’re going to keep us pretty busy.”

“I believe we are about to see a major expansion in our ability to work in, play in and explore space,” McAlister said of what commercial crew vehicle, including Crew Dragon and Boeing’s CST-100 Starliner, will be able to achieve. “People have predicting this for decades, and I hope we are on the cusp of seeing that happen.”