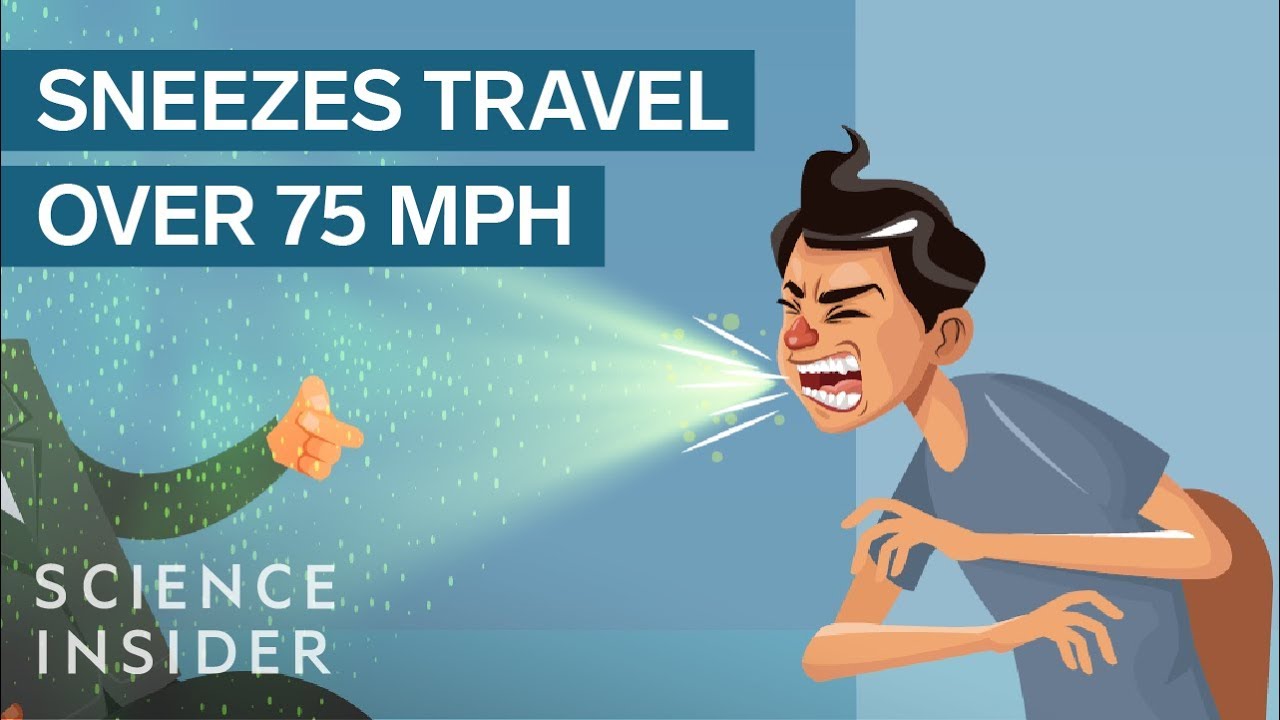 Are you sick? Don’t you dare sneeze on me!

Do you know how far your germs can travel?

Normally, you hold about half a liter of fluid in your lungs. So when you sneeze, you’re able to spray as much as a water bottle’s worth of mucus into the air around you.

It shoots out of your mouth in the form of moist, germ-infested sheets, traveling at up to to 35 meters per second. That’s fast enough to give you a speeding ticket on a highway. Once that sheet hits the air, it expands,  breaking up into snotty strings, then a series of different-sized droplets all trapped in a turbulent gas cloud.

One brave group at MIT discovered that the biggest droplets can travel up to 2 meters– about the distance between your desk and two desks down.

But most other droplets? Those travel much farther– up to 8 meters. That’s about 5 desk lengths!

Not only that: The germ-infested gas cloud is less dense than the air around it. So, it rises upwards, right to where ventilation systems and other people’s unsuspecting noses and mouths await. And even though these are relatively smaller droplets, they’re probably still teeming with harmful pathogens, like the flu virus. Even worse — depending on ventilation — they can spread through a room in just a few seconds, and remain suspended for up to 10 minutes!

Now, if you happen to notice someone around you sneeze or cough, you can hold your breath as you move out of range. But during flu season, that might not be enough, because there are danger zones everywhere– specifically on surfaces like desks, door knobs, and especially steel handrails.

Turns out, the flu virus has been found to survive for 24 hours on a steel surface, and if you touch that surface and don’t wash your hands before eating, you may have just gotten infected.

So, let’s say you show up to work sick with the flu one day, and you start to sneeze. Now, according to one study, you’ll probably infect 1 to 2 other people. You’re clearly showing symptoms of the flu. However, it takes a few days for symptoms to show up in the other people you infect. So, those poor souls unknowingly also come to work sick over the next few days and potentially infect 1 or 2 more people. In an office of 100 desks, this could mean 10 or 15 sick people by the end of two weeks! That’s over 10% of the office.

And all of it started with just one sick person: You. All thanks to the germ-laden cloud you so generously shared.

So, next time you’re not feeling great, and sneezing up a storm, think about your poor coworkers and take a sick day for yourself. And them.

How Contagious Is A Single Sneeze?