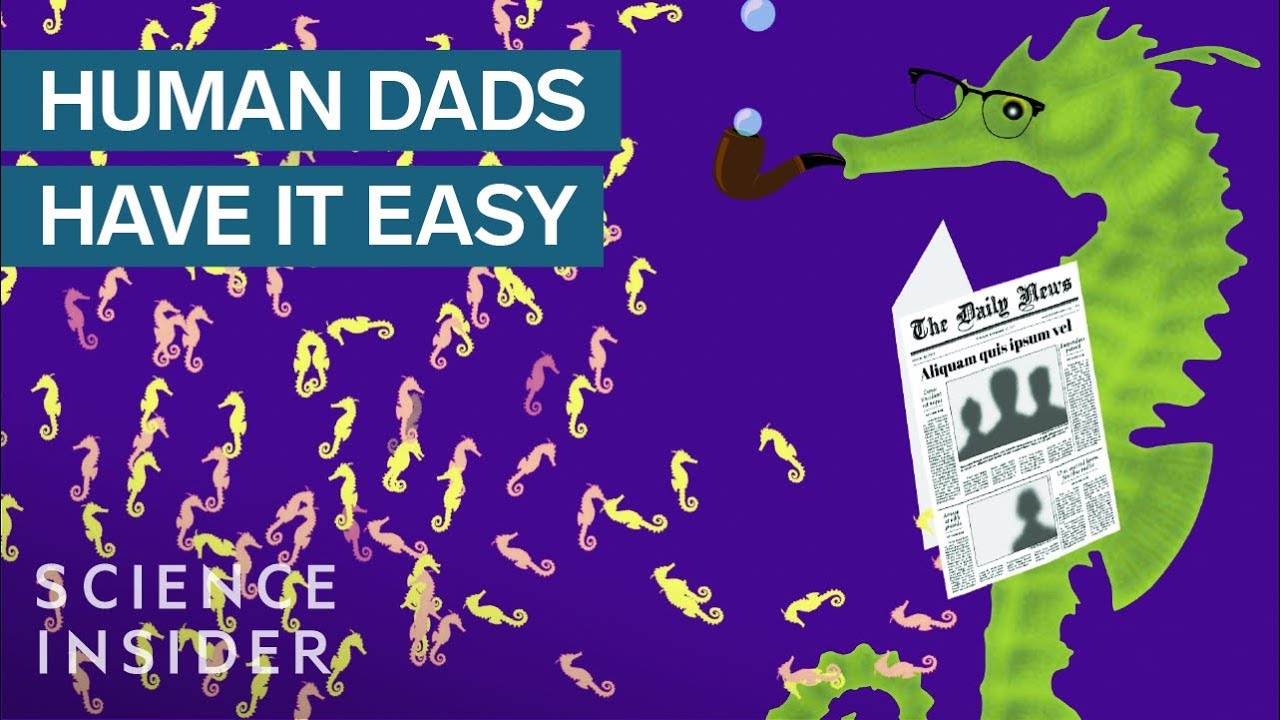 Imagine you’re about to be a proud, new father. But first, you have to give birth. To 2,000 babies.

Sounds painful, right? Well, if you’re a male seahorse, that’s part of the job. Turns out, there are lots of animal dads out there who do all the hard work.

The hardhead catfish takes parental sacrifice to the extreme. To protect the eggs, he’ll hold them in his mouth. And it’s not just one or two eggs. It can be as many as 65. The eggs take up so much space that he can’t eat because he might swallow one.

So, he’ll fast for over two months, while the eggs develop. Believe it or not, the male giant water bug takes on an even heavier load. Females lay up to 100 eggs on the male’s back. He’ll carry the eggs for the next 2 to 3 weeks as they develop.

But during that time, the eggs and mucus glue his wings down, …so that he can no longer fly, making him vulnerable to predators. Plus, the eggs weigh him down so much…he has to rely on slower, easier prey like snails. Or he just doesn’t eat at all!

But it’s worth it, to ensure his future offspring are safe. Lucky for the water bug, however, he can return to his regular life after the eggs hatch, and the babies fend for themselves.

That’s not the case for the male rhea. He doesn’t just stick around to raise his chicks on his own. He raises multiple families at once.

During breeding season, the male rhea will build a nest to attract as many females as possible. He’ll form a group with about 5 to 7 females and mate with them that season. Females lay their eggs in his nest, and then skedaddle — for good. Leaving him to raise and defend all 30 or so chicks — until they’re about 6 months old. Talk about the challenges of being an only parent!

Last but not least is the male emperor penguin who does a lot of the hard work early on. Females entrust their eggs to the males. But since penguins don’t have nests, males must play a delicate balancing act. Keeping the egg warm atop their feet, and away from the frozen ground they stand on, They can’t hunt or forage for food. They have to stay put — and protect the egg.

But the hard work doesn’t end there. By the time the chicks hatch, the fathers are starved from fasting for weeks on end.

But the chicks need to be fed. So dad manages to regurgitate some food from his esophagus to feed the chick until mom returns.

Looks like there are a lot of animal dads who deserve an award for Father Of The Year.

The Most Impressive Dads In The Animal Kingdom